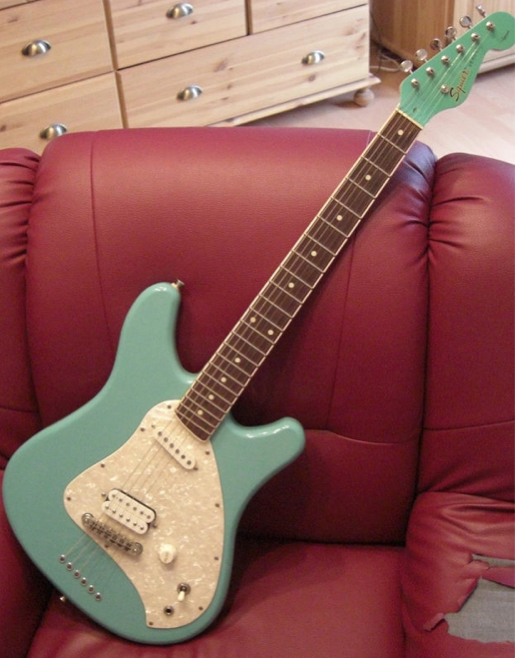 I'm happy to have found a decent picture of a Squier Venus, for I wanted to show one for a while now. Though it's not overwhelmingly creative or new, it's still one of the last few efforts of Fender to produce a new design (that's so rare that for example the new release of Fender recycles the 1960s Marauder prototype).

Well actually it's not exactly a Fender effort, since while searching information about the Venus, I uncovered a story of blatant plagiarism, that you can find extensively detailed here. To make it short, some guys created a guitar based on the idea of blending the cool design of a Rickenbacker with the playability of a Fender, and they came up with the Mercury, producing a few handmade models. They sold one to Courtney Love (though they were actually trying to present it to Kurt Cobain), and she enjoyed it so much that she ordered some more, but their small company collapsed and they quit he guitar business.

A few years later they figured out that Squier had released the Venus, allegedly co-designed by Love, but obviously a copy of the Mercury with a Fender-ish headstock (knowing that you cannot patent a guitar shape, but only the headstock, as Fender knows very well for having issued the most copied guitars ever). Tim George who designed the Mercury and tells this story says that he cannot blame Courtney Love as much as Fender. You just have to have a look at these pictures to judge if this story is convincing or not!

I don't know or care about this copying issue, but I really like Courtney Love, she's much more than what tabloïds show, she's a powerful and struggling woman and an inspired artist who opened the way for many others. And I do love women playing guitars, there are never enough of them - I cannot understand how could anybody ever consider that electric guitar is a male domain!

Anyway let's go back to the Venus. It was short-lived - released in 1997 and terminated in 1998 - and existed in 6- and 12-string versions. It had a characteristic Tune-o-Matic-like bridge and string-through-body holes, and if the commercial versions had two pick-ups - bridge humbucker and neck single-coil - and three different finish, Courtney Love's stage custom models had various finishes and only one pickup, different ones in different positions as much as I could judge from the pictures I found...