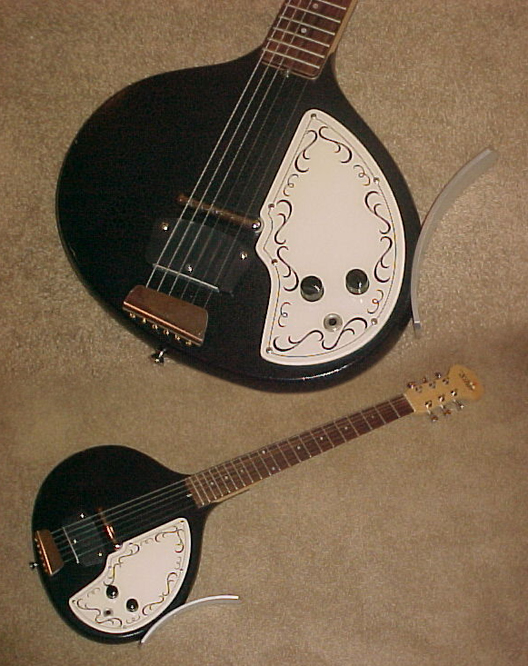 A good catch to start 2011, this Jerry Jones Baby Sitar is the coolest thing ever, I dream of it since I discovered it!
It is undoubtedly a guitar, with just a special bridge producing a buzz reminiscent of the indian sitar sound - most of the sitar heard in 60s psychedelic pop songs were actually produced with such an instrument!
Like all the Jerry Jones guitars, the Baby Sitar is originally a short lived Danelectro model, reissued by Jerry Jones during Danelectro's long gap in guitar production, with wooden bodies instead of the Dano trademark masonite though.
The Baby Sitar's body is loosely shaped like the gourd used for a real sitar, as is the headstock - a quite clumsy choice IMHO. It has the typical lipstick pickup perfectly adapted to the twangy sound of the mock sitar. I love the curved leg rest that prevents the Baby Sitar from being difficult to play while sitting - and you feel like sitting while playing sitar, don't you?
Contrarily to the original Danelectro, the Jerry Jones Baby Sitar is still available nowadays, though I find JJ instruments quite unaffordable, especially for an instrument you won't play full time...  I've been interested in guitar sitars for a while and you can find a few conversion buzzing bridges to turn regular guitars into electric sitars. But they  also quite expensive and - according to the reviews - rather unreliable and extremely difficult to set: there is a conflict between necks radius and the need for each of the six the strings to be stretched evenly flat over the 5 cm long bridge against which its vibration produces the buzzing sound. But I recently discovered a German company that issued Telecaster buzzing saddles so - for those who are interested in my humble activities - since I had planed to build a butcher block telecaster soon, I decided that it will be a sitar one... I'll keep you posted!
Bertram