This Lindert Loco-Motive is a decidedly individual take on guitar design and that's the kind of approach we admire here at Guitarz. 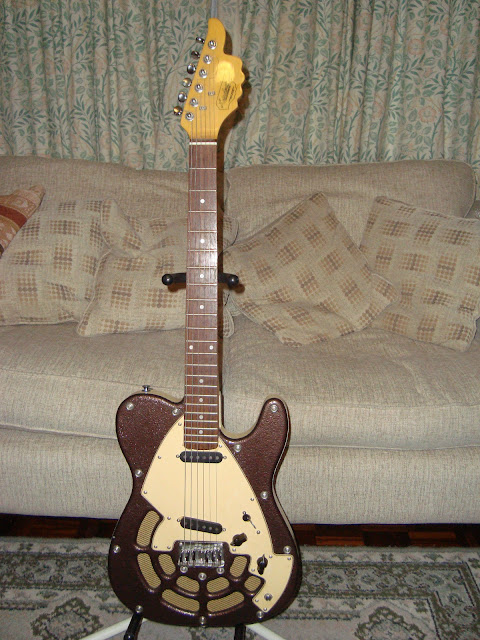 According to Linderts guitars (unofficial) fan site, Linderts were built in Chelan, Washington in the 1990s and were the brainchild of Charles Lindert.  Along with their plastic-like, textured bodies and their grillcloth or tweed inserts, their biggest features were the unique "Thumb's Up" headstock as shown in the photo below and the "Escape Velocity" neck, which was a combination of a C-shape at the lower frets that morphed into a V-shape contour that directed your hands around the neck as you went to the higher frets.


They have posted all the different models and lots of info and also describe the differences between the USA models (which this is) and the later Korean ones. Worth checking out. 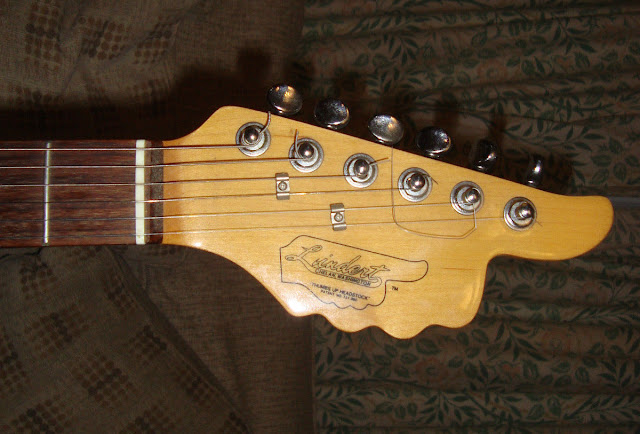 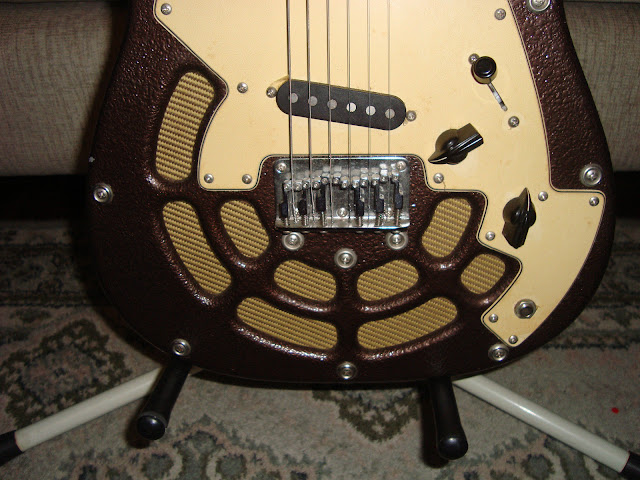 We've posted about Lindert guitars a couple of times before. A baritone guitar here and a six string bass there, so this is a nice addition to the family.
This is what the seller says about his guitar..."This auction is for my Lindert Loco-Motive 'T' Guitar in near mint condition. I believe this guitar is also known as the VT148 Victor.
I purchased this guitar new over 20 years ago and it has remained in it's bag since. I have probably taken it out of the bag four or five times to tune and play.

This model was made in Washington, USA and has the textured finish of brown and cream so loved by Charles Lindert.

Other ways of telling it is USA made rather than the later Korean models are:
Other features of this guitar are the 22 fret neck, chicken feet control knobs and the semi-hollow body with, what looks like, Fender Tweed cloth inserts. Infact when I first bought this guitar I wondered if it had a built in amplifier and speaker but unfortunately not so!

This guitar plays extremely well and is becoming, like all Lindert guitars, desirable and collectable.

The neck and string spacing are just wide enough to comfortably finger pick or play in a classical style.

Please note there is one small chip on the front top as shown in the eighth and last picture, other wise this guitar is in mint condition.

I am not sure of the serial number however believe it is hand written on a label, together with the date of manufacture, on the heel of the neck.

The guitar comes with a soft case however will be supplied with a new hard case for shipping."

I haven't posted in long while but this whacky beauty deserves to be seen in all it's crazy glory. (The clue is, of course, in the name).

© 2015, Guitarz - The Original Guitar Blog - the blog that goes all the way to 11!
Please read our photo and content policy.
Posted by battaolo at 7:37 am