There has been a lot of interest in this 2013 post about this Hamilton Custom Guitar. Mark Natola contacted us to say that he is a Hamilton owner too, having recently bought a beaten-up example via Craig's List.

Mark has very kindly emailed the several photos of his Hamilton Custom Guitar that you see here. He tells us that:


...the head stock was broken when I bought it. In addition, the fret board was splitting away from the neck and the pick guard was broken in several places. Other than that, it was in fine shape, 😊.

I brought it to a luthier who removed the fret board, cleaned up the neck, glued the fret board back on and replaced the frets. He repaired the head stock based on the “Made for Raymond” photo posted on the blog. In the mean time, I had a new pick guard made based on the metal shielding found below the original pick guard. We decided to stick with the original pickup and pots as they could not be replaced. I took the bridge apart and soaked and scrubbed the chrome parts with naval jelly. They cleaned up very well. The tuning keys were also soaked and cleaned in the same manner. Finally, I made a conscious decision to keep the original laquer finish, which is checked from age. Consequently, when the head stock was repaired it was necessary to stain it using a stain similar to the body color. My guitar had a “Made for Corinne” signature, however part of the name was missing due to the damage to the headstock. We decided to remove that and leave the Hamilton Custom intact.

I have now seen several guitars and it looks like there are subtle variations in the plate below the bridge. I can send more images later if you are interested. 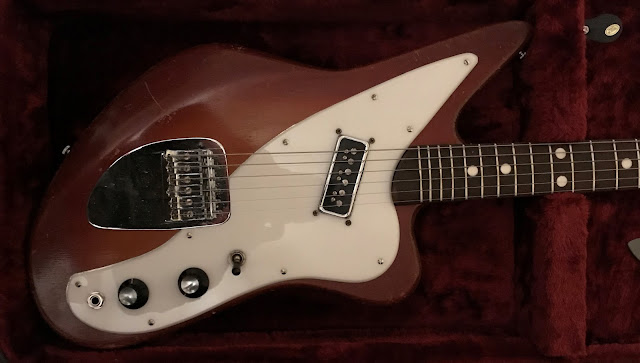 
...it would seem as there are at least five of these floating around including mine.
Am I missing any?

I wonder if the white one on Pinterest is the same one as owned by the father of Thomas who commented on our original blog post?

If anyone else has any more information or photos of Hamilton Custom guitars, please contact us!

© 2018, Guitarz - The Original Guitar Blog - the blog that goes all the way to 11!
Please read our photo and content policy.
Posted by Gavin Lloyd Wilson at 8:11 pm