The Paradox of Tone 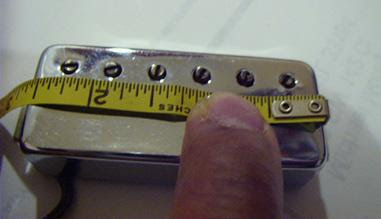 There is an interesting book by Barry Schwartz called "The Paradox of Choice: Why More Is Less". In it, Schwartz discusses the ironies that surround people today in terms of the perceived value attached to the ever-increasing abundance of choices. The more I thought about this, the more I started to think that as guitarists, we face a similar paradox.

It will become easily apparent here that I am dating myself. But regardless of your age or how long you have been actively playing, I think most will find that in your time with the guitar, there have been changes and the trend with many products is to offer more value for the same or a lower price.

This argument probably holds the most weight with regards to electronic devices as nano technology makes it more and more possible to squeeze more sounds, parameters and other options into smaller chips. But even with guitars, there is an increase in the array of materials being offered; stainless-steel vs nickel frets, various exotic woods for neck back and fingerboards, locking vs vintage-style tuners, sophisticated switching that allows three pickups to offer more than five sounds, etc...

Here comes the part where my wrinkles and Grey hair start to show.

When I was first getting into and over-dosing on electric guitar around the mid-‘70s the choices were few:

I'm being overly general here, but I have few memories that involve me or any of my friends not wrestling with these issues. Then, In 1984 someone showed me a Sholz Rockman and that was pretty cool; at least you could feel like you were playing loud wihtout driving everyone nuts. There were three settings; "Clean", "Semi-Driven" and "Driven", plus chorus and a little echo. I thought that it would have been nice to be able to really dial in the amount of drive or chorus you wanted, and I never really went out of my way to save for one, but I still thought that it was a pretty big breakthrough. Then in 1990, Zoom came out with a simialr unit called the 9002 that allowed you to change the amount of any effect, and there were several (including compression, which I just thought was awesome), and you could save 4 or 8 patches for later recall (can’t remember exactly how many). This unit sounded pretty good and again, you could pump this all through the headphones for late night jamming with the T.V. or four-tracking.

I could go on and on in my guitar-ish time-travels through the’70s, '80s and '90s, detailing each major breakthrough in guitar technology, but I think you get the picture; as time goes on, we have more options for a few more bucks, maybe even less. Now here we are with amps like the Line 6 Vetta II and Fender Cyber Twin SE. Both amps sound pretty amazing, and that is coming from someone who is generally against mixing computers and guitars. In my opinion, the Vetta II is a real stand-out. But just as with Multi-Effects Processors , I often have had mixed feelings about the end-result:

Do we really need / want so many choices, or do we think we do, simply because we can have them and they are affordable? 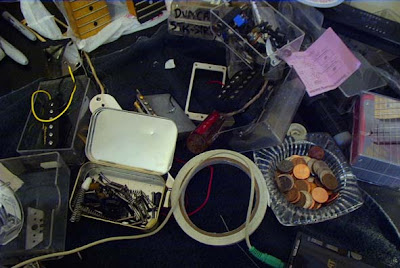 My experience has been that I, and most guitarists I speak to, have three critical sounds that the need when performing. Of course it differes from person to person based on your genre. I have played mostly Blues, R&B, Funk and some Rock for the last 20 years. So, I always need a clean sound, a slightly driven sound that I can tweak depending on the song, and a lead sound. I almost never need more. Whether you play Metal, or Polka or Jazz, do you honestly always have to have 9 or 10 different sounds, or is it really a matter of two or three sounds that need to be great, and you need to be able to toggle between easily?

Whenever I have to use a back-line and sound-check time is at a minimum, I simply make sure I can get my main three sounds reliably out of whatever amp I have to use, and make sure that switching between them is not gonna blow a fuse or introduce local police transmissions into my sound.

Needless to say, there are many exceptions to this. An obvious one would be if you are in a working cover / club date / wedding band and really have to "Nail" a certain tone for a certain song. I once saw a good friend playing in an Isley Brothers tribute show and he just nailed the phase sound on "Who's that Lady?" using his Boss GT 6. It was perfect. In such a case, lots and lots of sounds and choices are rarely a bad thing.

OK Kevin, what exactly is your point here?

In his book, Mr. Schwartz makes reference to the loss of certain dynamics that used to be a staple of human life and often came from families and relationships. Instead he states, we are fed concepts and and imagery that suggest our lives could be a certain way if we "Just do it..." (Nike), or similar concepts. But in the end, wearing a certain brand of clothes or drinking a certain energy drink will not change our lives. I think that for the most part, our lives are changed by events / decisions / actions / etc.. that usually involve interacting with other people. Same for guitar tone.

Actually, Yes. I am.

I think there was a time when guitarists spent countless hours on the edge of their bed, trying to coax a certain tone out of their instrument. I know I sure as heck did. I think many out there have too. it is very common when you are young; you simply do not have enough money to go out and buy whatever pedal / amp you think is guaranteed to to give you "That Sound...." whatever sound it is you are looking for.

Even when I was a bit older and had jobs, and could actually afford to go out and buy two pedals in one day, or almost any amp I wanted, it never really turned out to be that quite simple. It seems to me that great tone, just like great relationships in life, take time and work. You can't really just dial-in a "Magic Patch" and "Wham!", you have your holy-grail tone. Granted, some of these digital modeling amps / pedals really do give you the tools to nail someone Else's tone for a certain song... and as I mentioned, there are situations where that is just perfect. But at the end of the day, don't we all really want our own tone? Wasn't it just the coolest feeling in the world the first time someone walked up to you after a gig and said "Wow, I love your tone..." I always preferred that to compliments about my playing. And believe me, I'm not saying I've gotten so many of either. But the few times when I was fortunate enough to have someone remark about my tone in a positive way, it always felt very good… much better than “Hey Great solo on Voodoo Chile…” 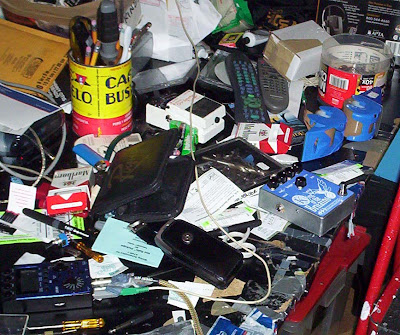 "hmmmmm…..Ok Kevin, so what you are saying is that the only way anyone can get a really great tone is to toil away at it for years and endure a certain amount of suffering in order to get to that point?..."

Q: Is it possible to pick up the guitar for the first time and after only one year, you find an awesome tone that you love, everyone else loves, and never ever give it another moment's thought for ever and ever?

A: Yes. But it is unlikely.

I think that most players who have found a sound (or a few sounds) that they like, and that others like as well, have spent some time cultivating that sound. they tried many different guitars / pickups / amps / speakers / etc... to really find that magical combination. I can describe every inch of my favorite guitar, the two pedals I cannot live without, my favorite pickups, and the two amps that I'd prefer to be stranded on a deserted island with. But the actual details are not the point. The point is that because I spent so many minutes / hours / days / weeks / months and years with a soldering iron in my hand, or locked in a room with several patch cords and pedals and amps, trying to get the sound that I heard in my head to come out of the amp, because of all this time... when I woke up one day and really said, out loud: "Yeah, that's the sound I was looking for. I'm done”….it was a feeling that I don't think I could have gotten by simply choosing "Patch # 32"... it felt like a kid that I had raised for 20+ years and today was the day that he / she graduated from University with excellent grades.

In Summary: I have nothing against digital modeling at all. In fact, I have many positive things to say about it and will in the near future. It's the same way I feel about Cable TV; sure, I miss the romance of the Rabbit-Ear antennae, having to fuss with them in order to get my favorite show to come in and the feeling of accomplishment when I did, but I certainly do enjoy clicking around the 3,000 channels I have now for $50 / month. The title of this post, and the very long journey through my feelings about tone here are merely to point out that while it is very cool that all this excellent technology makes is so incredibly easy to sample / loop / model / 8-track / mix / tweak, etc... and do so many very (and I do mean very) cool things for very little money, there is (in my opinion) nothing like seeing a really good guitarist up there on stage getting a really great tone with mostly their fingers, their instrument, a few choice pickups / parts / pedals, and not much more... and knowing that it it took some effort and time to really arrive there. It just sounds different. Better? we can argue that for days, but it is a sound that I feel we all know when we hear it. And I don't think it always comes from having another 64 pre-sets of classic amp / pedal models of added value in your “Jibloom EtherCrest-5000”. It takes time and effort to discover and nurture. Just like most things of real value in life.