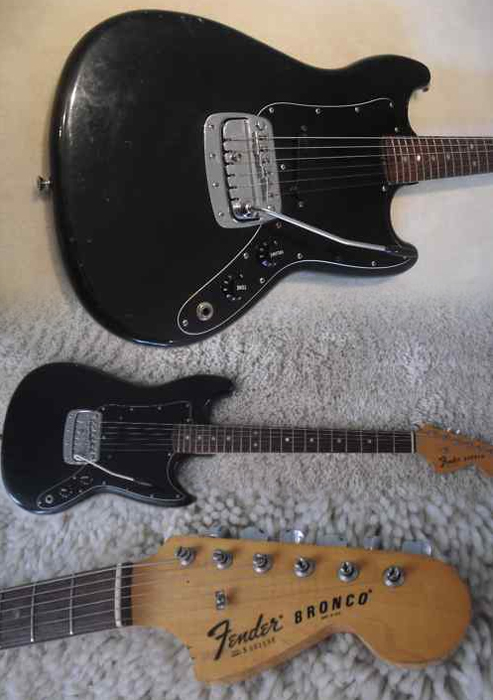 In the comments about the Musicmaster, Greg praises the Fender Bronco and I have to admit that I've never heard of this guitar until then (my indifference toward Fender guitars is slowly fading away though...)
Luckily I just found this one currently offered for sale on eBay.de, and it does have this cool tremolo that looks much more convincing than the stratocaster one (I say 'look', I didn't put my hands on it, and if I did, I'd probably not really know what to do with it - the best use of a trem bar I ever did was to create extreme detuning effect with a Floyd Rose...)
But let's go back to the Bronco: a short-scale student guitar baring a single pickup in bridge position, it belonged to the Mustang series, and like the other 60s Fender cheapos, it turned into a semi-cult guitar, because, you know, Leo couldn't be wrong, ever.
It's lucky that Fender stopped then naming their guitars after horses: after Mustang and Bronco, if they would have followed the American horses theme, the next one would probably have been Appaloosa, but if the topic was feral horses, they should have used Przewalski.
Bertram