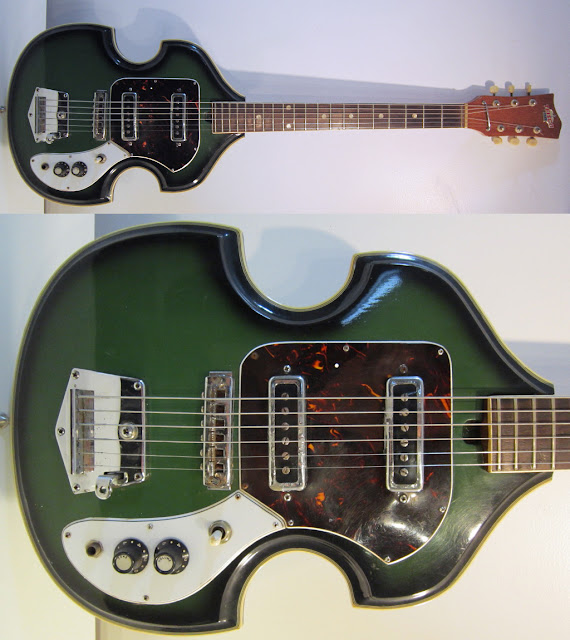 A rather breathtaking title for a nice little "phew" (sharp intake of breath or appreciative whistle as is your wont) guitar. A Teisco violin shaped guitar currently languishing in post-celebrationary haze over on Ebay.com. Now, we have featured these guitars TWICE before on Guitarz, here and here but I hope we can be forgiven for showing one again. These violin shaped guitars were only made for about a year (1968) and so are pretty uncommon (if not downright rare) and they were sold under at least two different badges, just to confuse things even more. This one is badged with the Teisco Crown logo (my own one is blessed with the Satellite brand). If one turned up with a Guyatone, Silvertone or Kawai logo, it wouldn't be too much of a surprise.
This guitar was produced in red-burst and green-burst colourways and with varying scratchplate (pickguard) combinations of white, black and tortoiseshell (based on my own observations). This one has a typical Teisco tremolo that can be seen of lots of other models, a fairly standard bridge for Teisco, nicely yellowed nylon tuner bushings and absolutely typical Teisco pickups.
I'll include an excerpt from the sellers description as I think it does warrant the re-telling;

Ahh don’t you love these guitars?? Really nice green burst paint job here. Cool shape looks very mod and neat. Great for garage rock or you retro rockers out there. Also this guitar is perfect for people with smaller frames or you lady rockers out there. Its a little bit smaller than a normal guitar. The guitar is great cool shape. A few scratches here and there and the guitar could use some new strings. This guitar is very rare and difficult to find. It plays nice and sounds amazing!


So, those Guitarz readers of diminutive stature and/or of the diminutive sex, this guitar may well be the one you've been waiting for...
I will agree that they do play (very) nice(ly) - my own one has an excellent neck and an action that no one would be ashamed of - and, even if those pickups do only sport an output of 4-5K, they produce a decent rich sound that anyone, who was attracted to the vibe of these kinds of instruments, would be more than content with.
Anyone still feeling flush after the Xmas excess or who woke to find a nice little wad of crispy banknotes in their stocking from Santa on Christmas morning, this little treasure is yours for 850 US Smackeroonies (plus the usual). 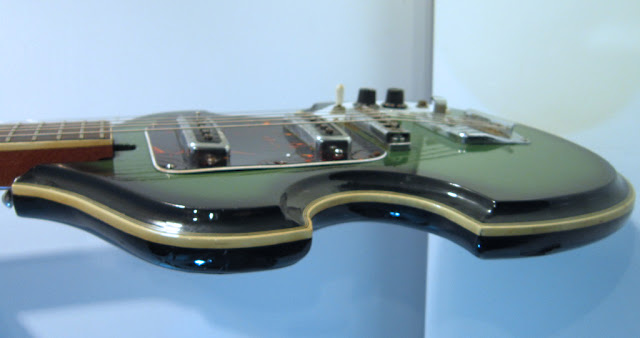 Just to illustrate Marshall Will's remark in the comments, these guitars are pretty sleek. That keeps it light and comfortable to play. The only downside is that the lower "horns" can dig in your thigh when playing sitting down. But, this is a guitar for standing up and showing off with so no problem really, eh?