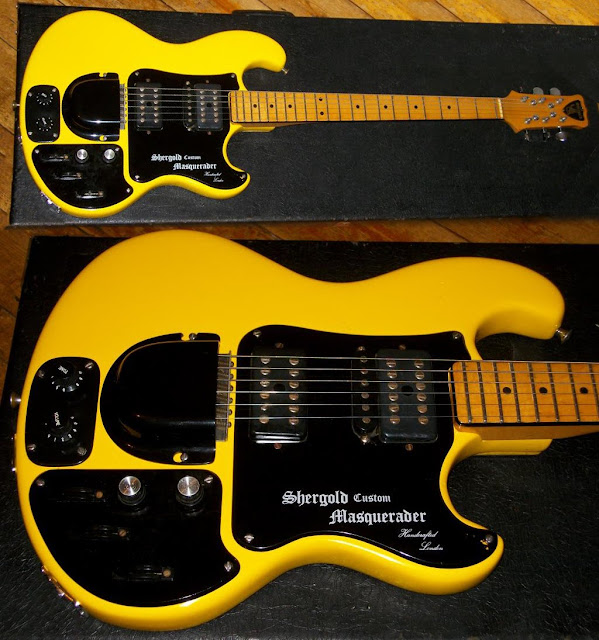 After Sunday's lovely 60s Vox Grand Prix, we have another classic British guitar. This time from the 70s.

This beauty is currently on Ebay. The seller doesn't go into much detail except to say that this is a 70s Shergold Custom Masquerader with extra single coil pickup with its own output for stereo use. He doesn't say whether it's an original variation or a later addition but as it is a "custom", maybe that's its customisation.

Judging from the same (slotted) screws on all the plates and the (surprisingly still present) bridge cover, it may well have been done by Shergold themselves. Shergold were an offshoot from Burns and Hayman, and are similar to the Haymans of the early seventies. Check out the Shergold site for more info.

Anyway, the other thing he doesn't say is how gorgeous this instrument is. It definitely fits in the "cracking" category. I love that yellow colour. A little reminiscent of Fender's Monaco yellow Strat. The first time I remember seeing one was being played by Chris Salmon of Stump on their "Chaos" video and have had a hankering for one ever since. This Shergold seems to be in pretty good shape and with a starting bid of £395, is giving me a very sunny feeling and is quite tempting.

David In Barcelona (I've been a bit quiet of late but hopefully I can get back into the swing of posting).
© 2012, Guitarz - The Original Guitar Blog - 10 years and counting!
Posted by battaolo at 12:00 pm