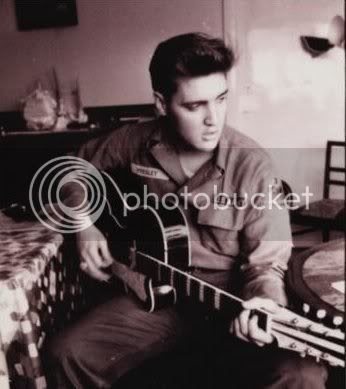 Dallas-based "Heritage Auction Galleries" plans to auction a 1958 Isana Black Pearl Acoustic guitar once owned by Elvis. The guitar was purchased during his stint in the army. "Heritage" says it was one of less than 150 made that year and is believed to be the only guitar used by him while in the service. Years later it passed into the hands of friends and was eventually used to pay for tutoring fees by one of Elvis' secretaries. It's been on display at the Rock and Roll Hall of Fame in Cleveland, Ohio, and at the Rock N Soul Museum in Memphis, Tennessee, for the past two years. Heritage Auction Galleries will hold their upcoming Signature auction on October 6 & 7, 2006, at their headquarters in Dallas, TX. The reserve amount is $150,000.
Posted by Gavin Lloyd Wilson at 1:43 pm