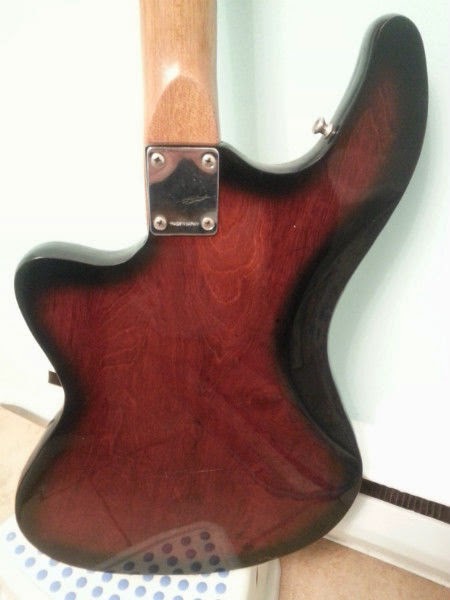 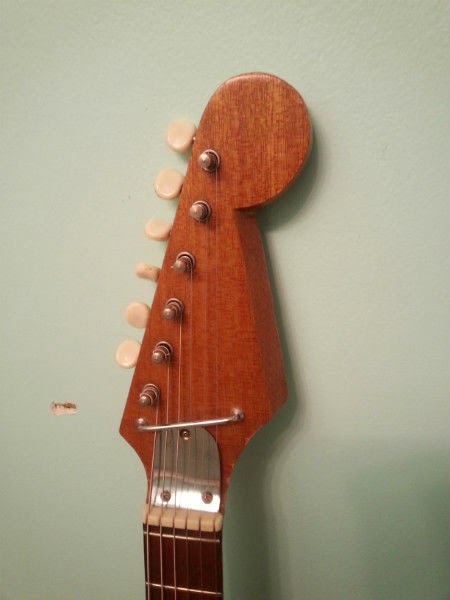 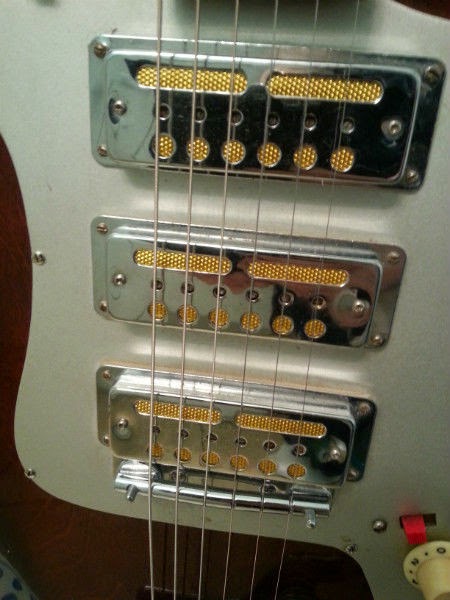 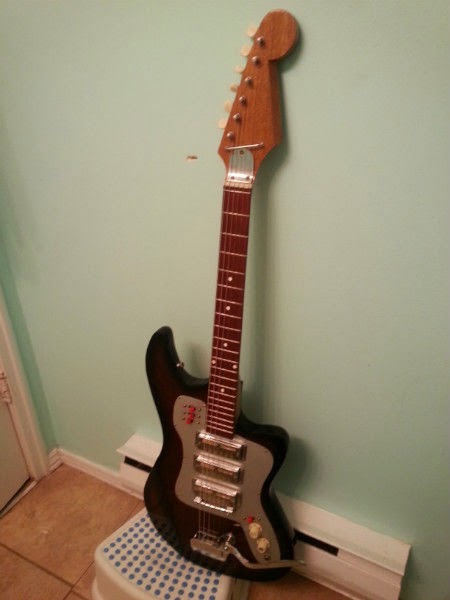 Look at the upper horn on this awesome Japanese guitar. I'm not sure I've seen this model before.


Someone has looked after this guitar quite well. It has a few marks on the finish, but no noticeable dings or gouges. Sporting 3 gold foil pickups, mini switches, and an intact tremolo, it's hard not to message the seller right now and ask if they would consider shipping.

If I had to hazard a guess I'd say it was a Kawai or perhaps Guyatone.

Update: I went to check the sale again and I guess someone loved it as much as I did, as the guitar is no longer listed. 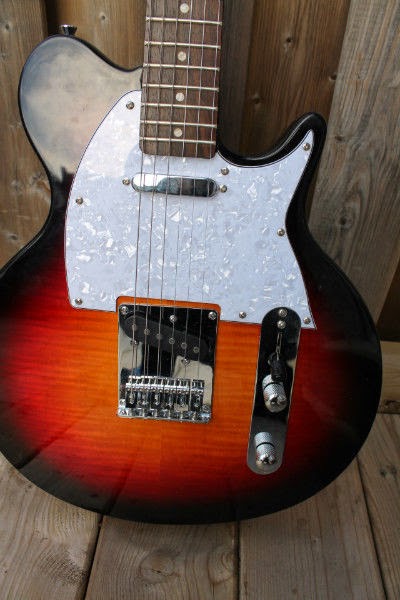 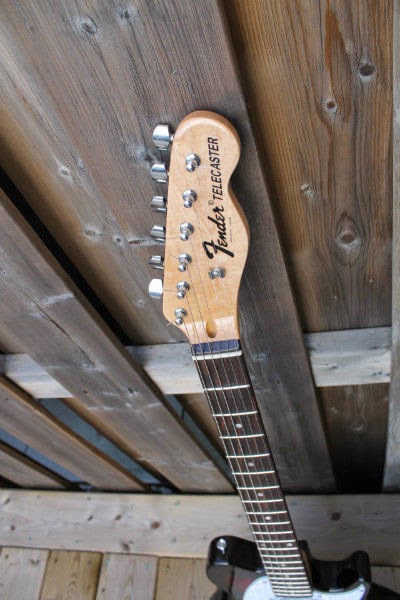 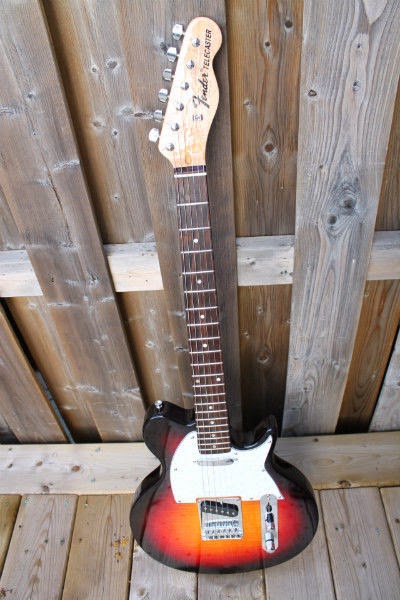 There is a lot to like about this "Telecaster"

1- It's a nice variation on a very well known theme
2- It's only $95 ( and that's Canadian dollars, so it's almost free )
3- The outdoor pictures can help me forget the foot and a half of snow that fell last night (that I should be out shovelling as i write this)
4- The only text in the Ad from the seller is "Telecaster Copy", so we know that they are honest

What I don't like is the Fender Telecaster logo on the headstock. Why would you consider that this would ever be mistaken for a real Telecaster?

Have some pride, $95 guitar, you're fine just the way you are. 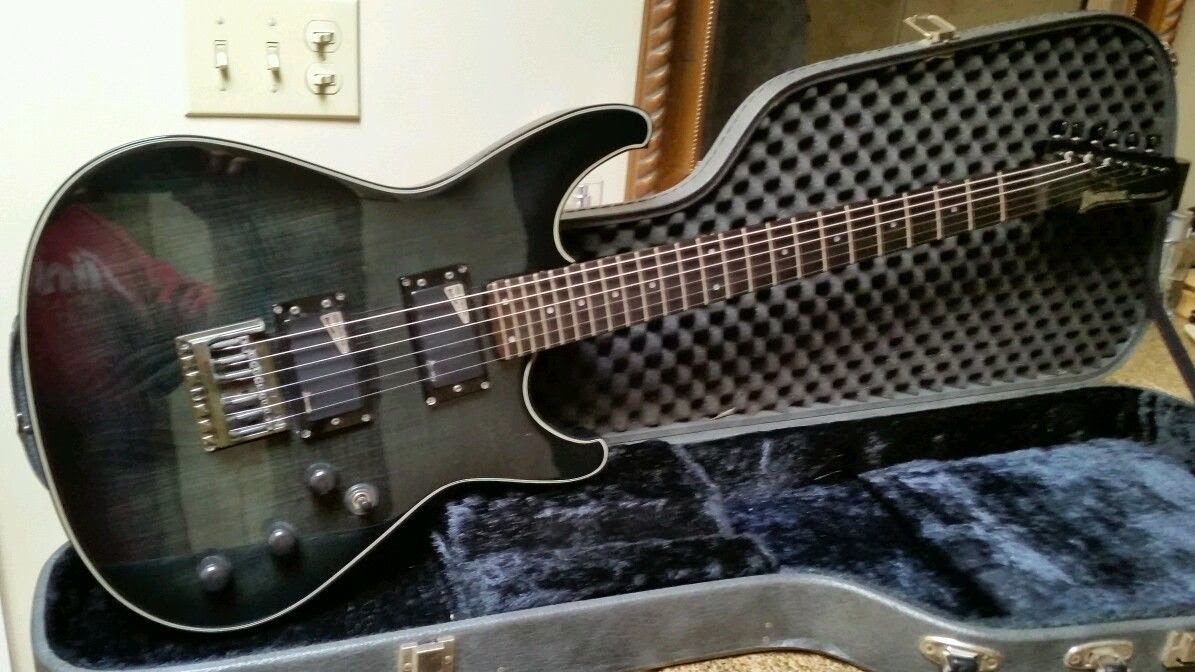 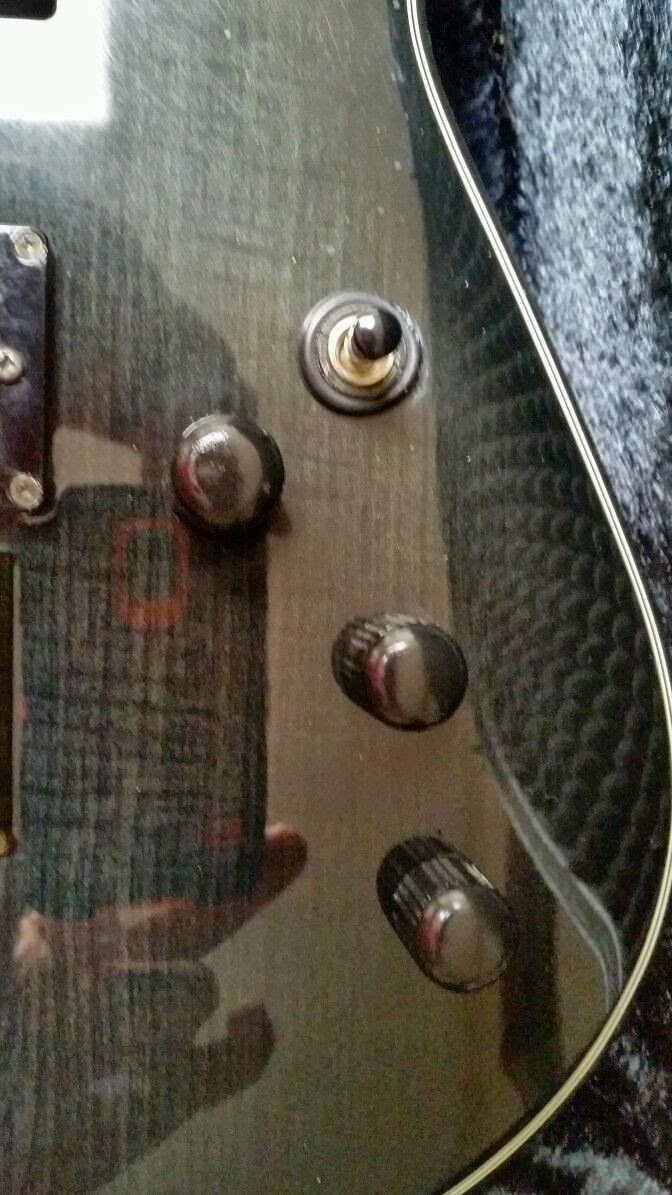 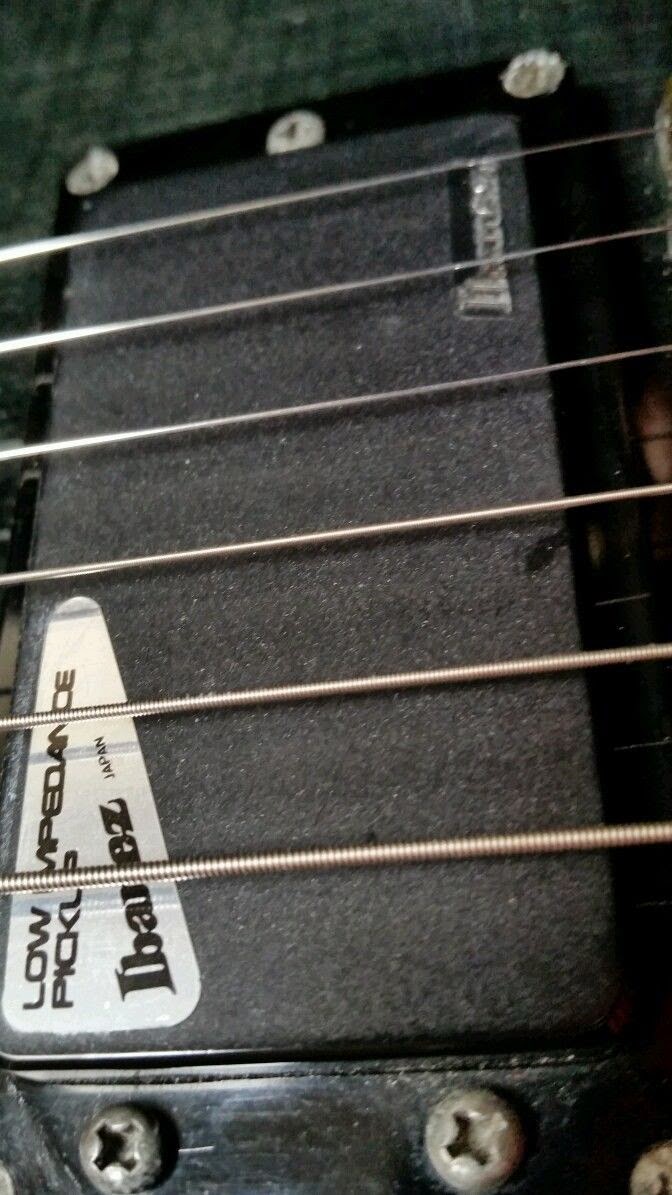 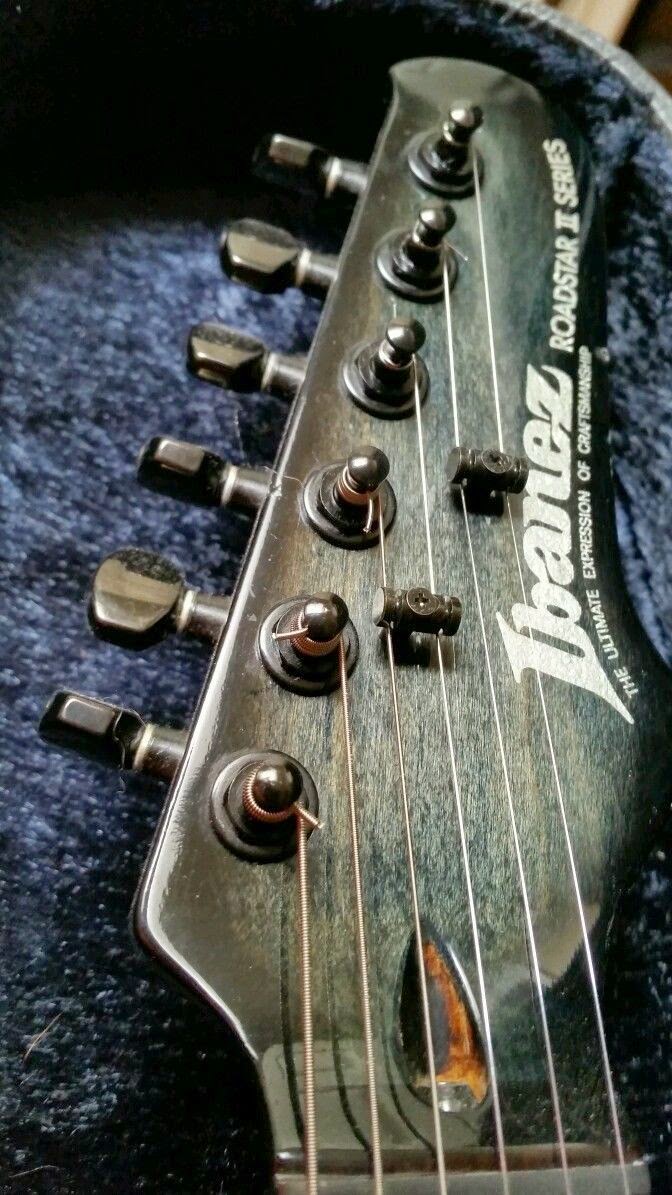 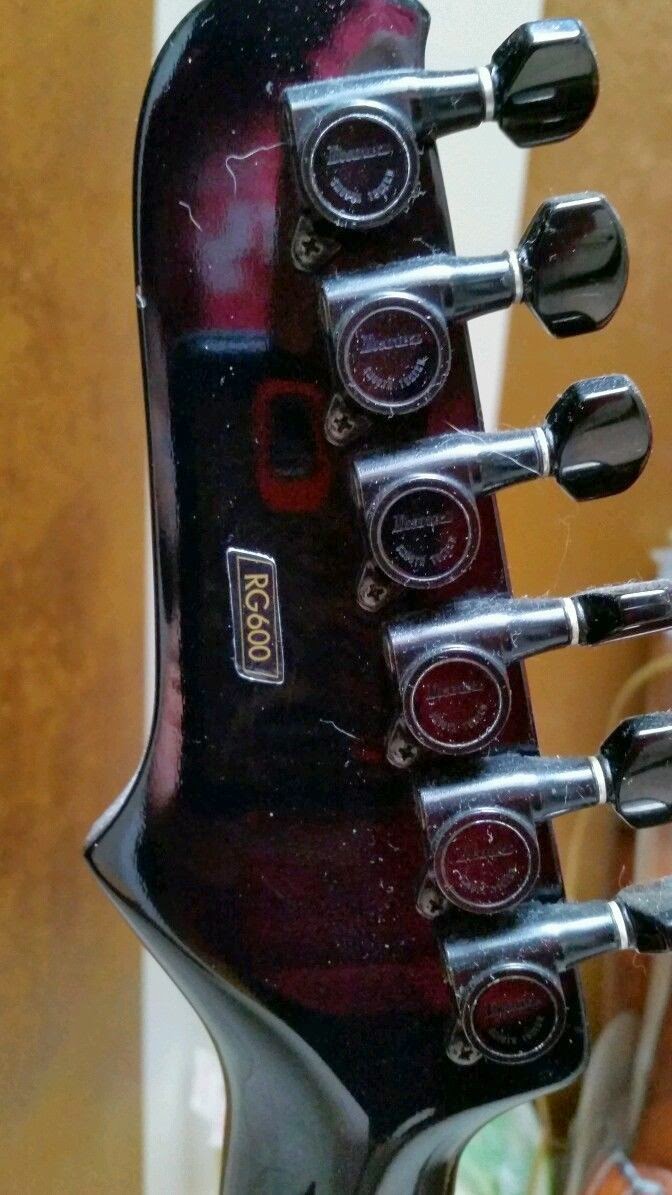 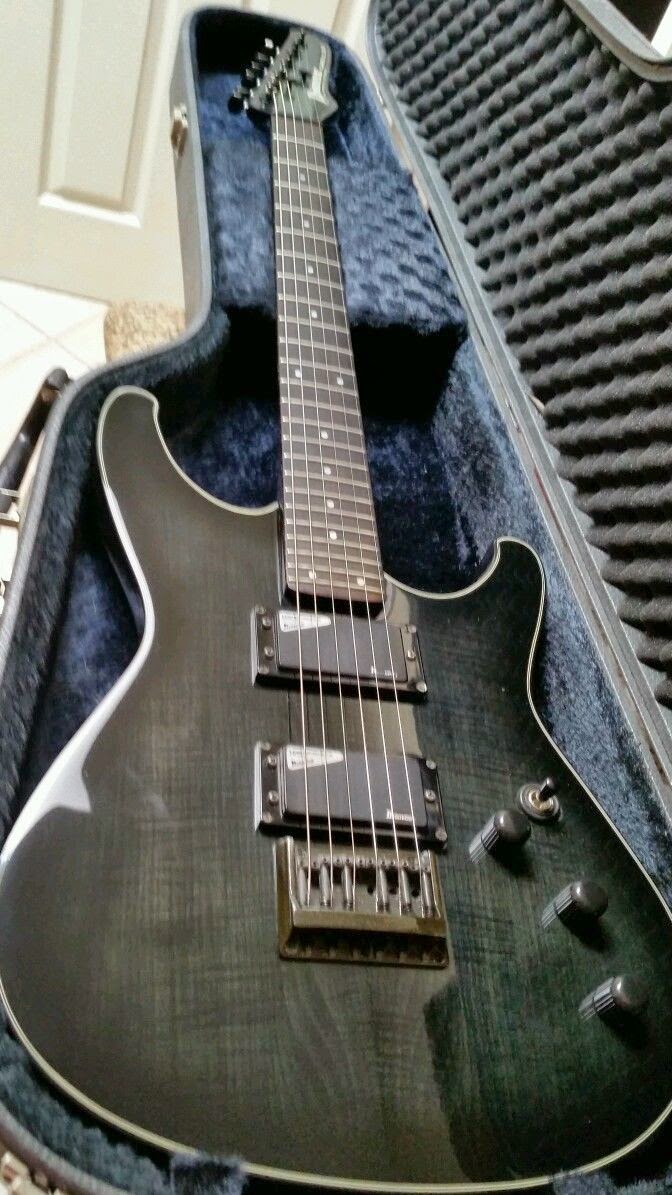 Im a little surprised that this Ibanez Roadstar sold for only $380 US on eBay. I've seen lesser Roadstars sell for more.

My first guitar was a Roadstar and I still have it. It was the beginning of a long love affair with 1980s Ibanez guitars. I must admit that until I saw this auction I had not even heard of the Stanley Jordan signature model. I like the understated colour, the slight nod to a Rickenbacker, and the hardtail bridge.

I hope it went to a good home 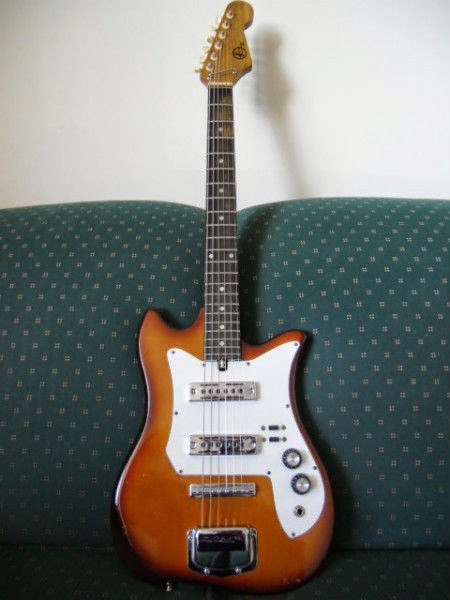 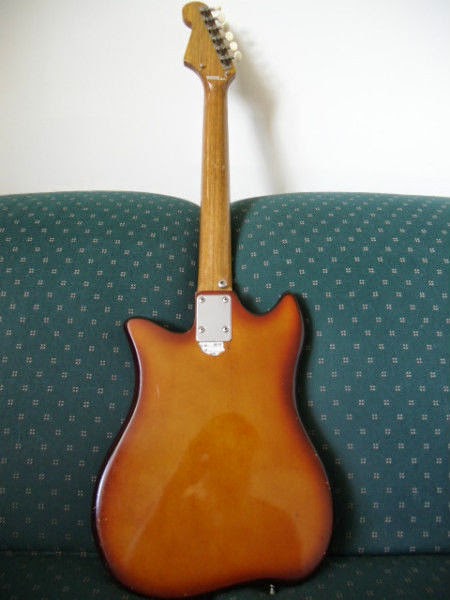 For some reason part of my brain cannot believe that Kay made guitars after the 1960s. I know that they did and there is a lot of evidence to prove it.

Exhibit A: This gorgeous KE-20 from 1985. Simple and dare I say, elegant. Especially considering the usual pointyness of the era. I love the subtle nod to a Teisco Tulip as well.

Fenix XL30 Acoustic Guitar made in the same factory as Fender 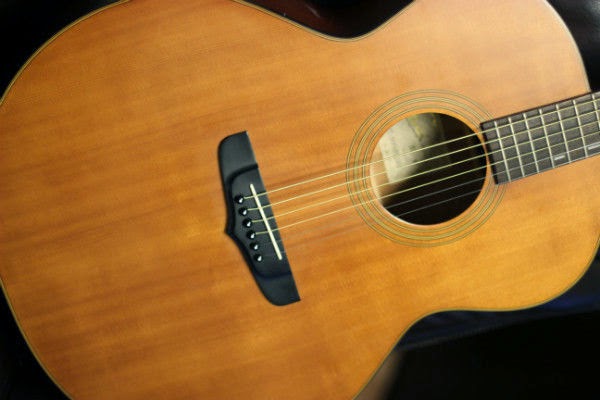 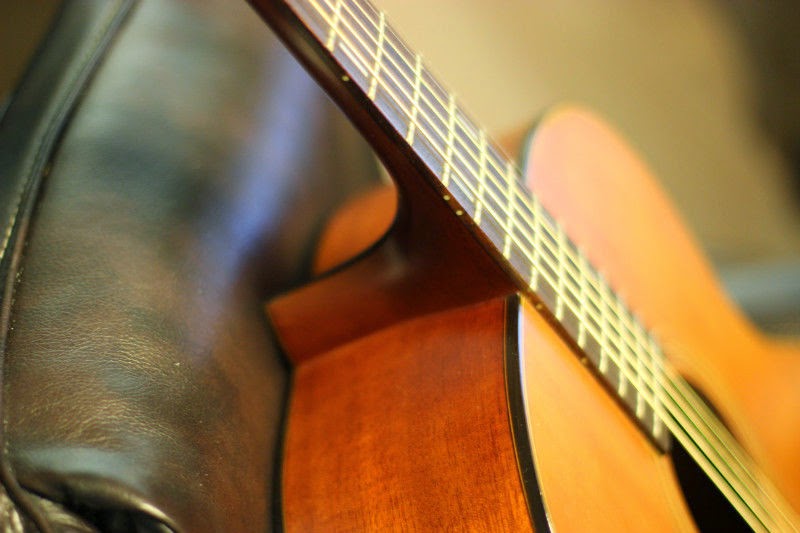 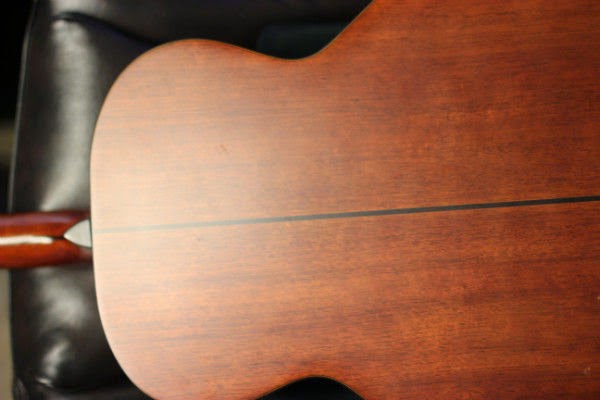 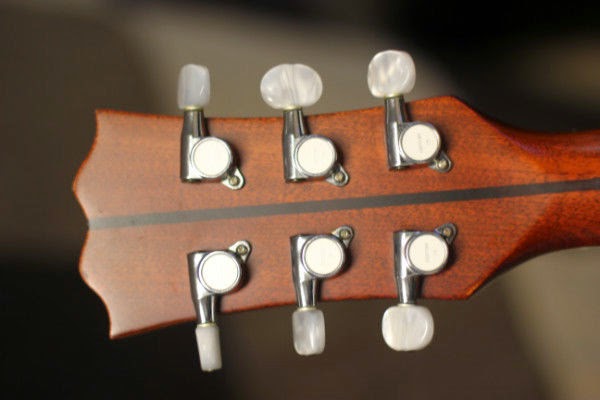 This Fenix acoustic guitar was apparently built in the same Japan factory that was building Fender acoustics in the 1980s,

I've played a few of those Fenders and they are probably my favourite Fender acoustics. This guitar however beats them all in simplicity and grace. It looks as nice as a Lowden and is at a much more affordable price. I'd like to hear how it sounds and feel if it's as nice as those old Fenders. 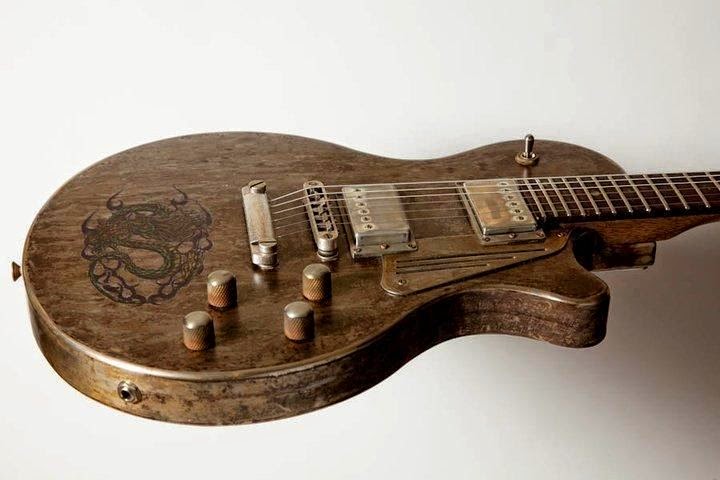 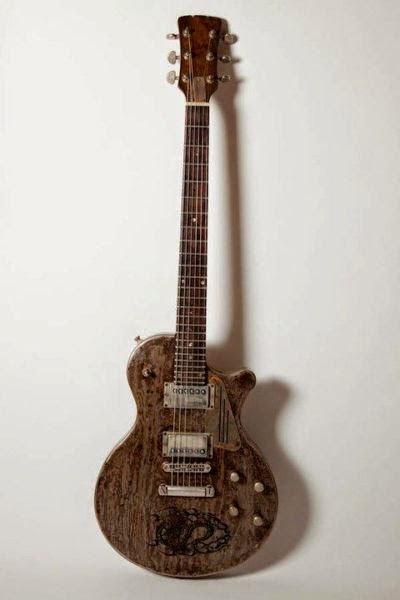 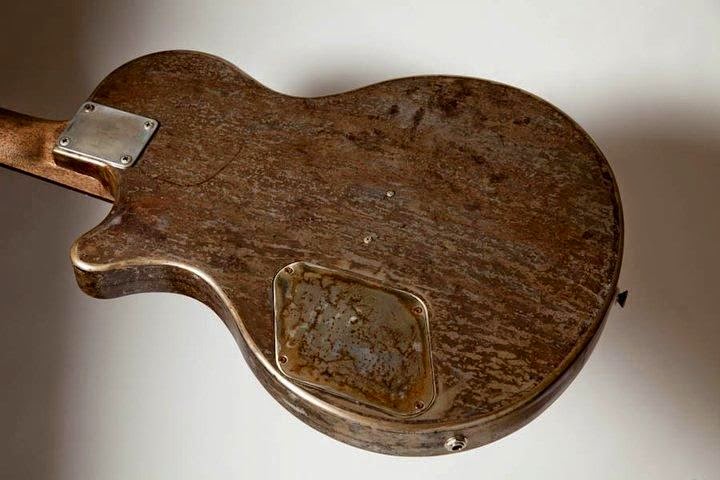 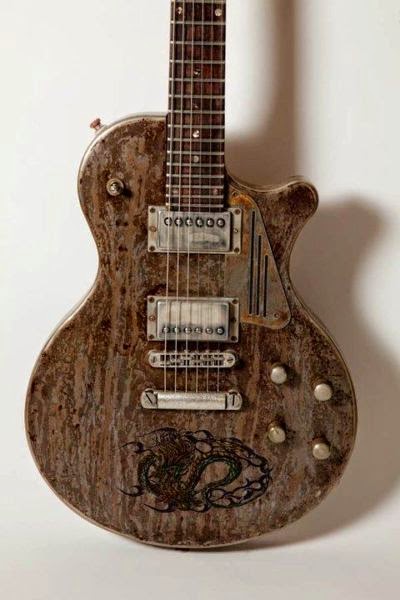 I'm R.W. Haller, and I'm going to be helping out Mr. Wilson with my favourite blog. I usually get my guitar fix from this site so I'll be digging deep to find weird and wonderful guitars to bring to your attention.

So yes. I'm starting with a familiar shape. Admittedly, I am not a Les Paul player ( I play a Burns Steer, a Tele, and a Peavey T-60, but more on those another time ), but there is something about the look of this metal, dragon tattooed beast that speaks to me on a deeper level, and the  droopy cutaway reminds me a bit of this awesome Devo axe.


© 2015, Guitarz - The Original Guitar Blog - the blog that goes all the way to 11!
Please read our photo and content policy.

The Shonky doubleneck guitar/bass in action!

Please accept my major apologies all around for the very infrequent blog posts of late. I've just been busy with other projects and unfortunately the blog has been put on the back burner. Previously I had asked readers if they'd like to help and post on the blog, but being so easily distracted I failed to follow up on any of the offers. Please accept my apologies once again.

Meanwhile, so you can hear how it sounds and to demonstrate my vision in having this thing built in the first place, here above is my solo rendition of "Glacial Express Way" from the Spurious Transients album Portraits Of A Landscape using the Shonky doubleneck guitar/bass.

© 2015, Guitarz - The Original Guitar Blog - the blog that goes all the way to 11!
Please read our photo and content policy.
Posted by Gavin Lloyd Wilson at 11:46 am No comments:

Pleasant - yet another vintage Japanese guitar brandname that I've never heard before. It's so difficult tracing back these little brandnames to their original manufacturers as the Japanese factories of the day seemed to have a mix and match mentality where you'd see the same designs and hardware appearing of guitars coming out of the different factories owned by different companies.

For instance, take this Pleasant SEV218. The headstock shape looks very familiar, although subtly different from those appearing on various other Japanese guitars from the 1960s, e.g. Barclay, Sekova, Greco, Inter-Mark, Teisco, and probably a few others!

The guitar itself is a delightful mish-mash of influences, Fender and Mosrite being the most obvious. There's the Fender Jaguar-like pickup selector switch panel, the rakishly-angled Mosrite-esque neck pickup, and the Stratocaster-style contouring on the rear of the guitar - but note how the so-called "belly cut" has been applied to both the bass and treble sides of the rear of the guitar. The neck is the usual multi-laminate affair typical of this period.

Currently listed on eBay with a Buy It Now price of US $549.

© 2015, Guitarz - The Original Guitar Blog - the blog that goes all the way to 11!
Please read our photo and content policy.
Posted by Gavin Lloyd Wilson at 9:51 pm 1 comment:

Following my October 2014 blog post asking for assistance in realising my dream of a very specific doublenecked guitar and bass, Antony Moggridge of Shonky Musical Instruments took up the challenge to build this beast for me. Above you can see his initial draft design following an exchange of emails in which I made clear exactly what I wanted.

My main specifications were for a doubleneck guitar and bass with the bass neck below the guitar neck; I wanted a compact body so as to keep the sheer bulk of instrument to a minimum; and I wanted the controls to be simple and uncluttered with NO switches on the upper bout or upper horn of the guitar, and no switches on the body in the area between necks - all switches HAD to be down the bottom at the rear of the instrument.

Together we hit upon the idea of using concentric pots for the volume and tone of each neck so as to save space and keep the control layout very simple. I also suggested that perhaps the design could be slightly Jazzmaster-like as opposed to taking its visual cues from the usual suspects (SG, Les Paul, Strat, Tele, P-Bass, etc).

Below you see the OSB mock-up body with bridges and necks positioned to give a better idea of what the final guitar will look like.

Another constraint was that I wanted this built on a tight budget. In order to keep costs down, I sent Antony a package of components, spare parts that I already had, namely: a Strat-style neck with a trimmed headstock, a left-handed Peavey bass neck, a set of Strat-type pickups, a pair of Danelectro lipstick pickups, a hardtail Strat-style bridge, and a P-Bass style bridge.

Antony re-shaped the headstocks to his own preferred Shonky style, which I agree is quite elegant. Note that in order to do so, he had to glue an extra piece of maple to the guitar headstock which had been quite brutally trimmed to vaguely resemble a 1960s-era Vox headstock.

In the next few pictures we see the shaping, contouring and routing carried out on the centre-joined two-piece reclaimed sapele body.

The next photo Antony sent to me to illustrate the size of the body. You can see that it's not a lot larger in size than the Strat body laid on top of it.

Antony initially applied a hand-rubbed stain (we wanted a natural finish as it seemed a shame to cover up the natural grain of the sapele), and then sprayed the body to accomplish a tobacco sunburst.

...and here is the scratchplate itself cut from some rather interesting snakeskin-effect scratchplate material that Antony had sourced. The scratchplate and bridges have been positioned on the body so as to get the general effect of how it will eventually appear.

Getting there... Hardware installed.

And all strung up and ready to go...

I've been playing this guitar/bass daily since I received it a week ago. (Antony actually finished building it in December, but we decided not to send it until after the madness of the Christmas posting period was over and done with).  I am exceedingly pleased with it and believe that between us Antony and I have come up with a fantastic design for a doubleneck.  OK, so it IS heavy at about 14lbs, but the body is nicely compact, playing the bass neck feels very natural and it is not a problem having to reach over the guitar side. The control layout is sensible and easy to use, and there are no switches in silly places where I might hit them accidentally whilst playing. Moreover, I find that it actually balances well on a strap and does not suffer from neck dive - a common complaint with doublenecks.

Antony said that in retrospect he could have made it a little lighter be removing more wood from beneath the scratchplate, and perhaps making the body shorter so that there wasn't so much wood beyond the bass bridge. But then I have to ask, would it have hung so nicely on a strap? Might that have made it neck heavy.

I played this at rehearsal with my band Spurious Transients at the weekend and it coped admirably. I've also been experimenting using the doubleneck in conjunction with the new Boss RC-1 Loop Station (the uncomplicated one!) and the results are very promising indeed.

I'm going to be playing some Spurious Transients gigs later in the year (including at this Festival of Psychedelia - hey, you can't get more prog rock than a doubleneck) and will be using this baby so I can switch between guitar and bass on the same songs.

Huge thanks to Antony (who gives his own account of the build here).

© 2015, Guitarz - The Original Guitar Blog - the blog that goes all the way to 11!
Please read our photo and content policy.
Posted by Gavin Lloyd Wilson at 5:02 pm 3 comments:

Although uncommon, I have seen acoustic guitars equipped with tremolo arms before now, or should I say "vibratos" because as far as I can recall these have exclusively been arched-top acoustics equipped with Bigsby vibratos. This Japanese-made Ibanez model ATDS10NT circa 1983 is something else, as it has what appears to be a tremolo-arm mounted into an electric-style floating bridge, which is allegedly "fully functioning".

This item sold on eBay recently for US $599.

© 2014, Guitarz - The Original Guitar Blog - the blog that goes all the way to 11!
Please read our photo and content policy.
Posted by Gavin Lloyd Wilson at 7:50 pm 6 comments: