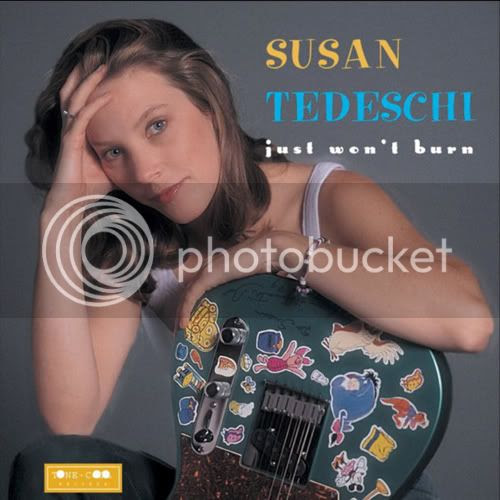 Listening to Susan Tedeschi's 2005 album "Just Won't Burn" yesterday, and glancing at the cover, I noticed that her Telecaster has been signed by someone. I can make out the "To Susan..." part but can't read the rest. It looks like the first part of the name is in quotes. (Click here for a enlargement).

Does anyone know whose signature this is? It could be someone I've never heard of, I appreciate that, but I'm just curious.

And just to confuse the issue further, I found other photos of Susan's Tele - including this one - where the same guitar is absolutely covered in signatures. So, firstly, whose signatures are they, and secondly, is this photo more recent than that on the cover of "Just Won't Burn" or vice versa? Were the (other) signatures removed before the Winnie the Pooh stickers went on or were they a more recent addition?

UPDATE: Alli thinks that the main signature may be "Gatemouth" Brown. (See the comments).
Posted by Gavin Lloyd Wilson at 12:41 pm