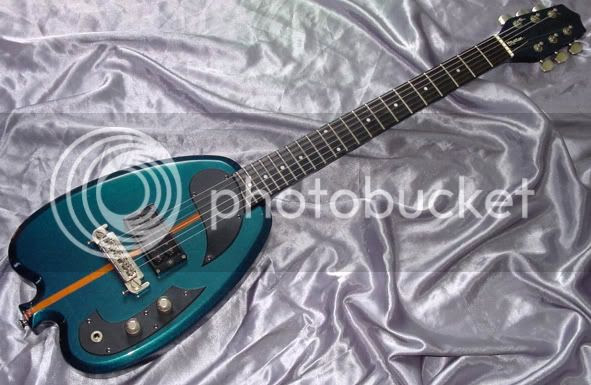 Despite its "also known as" tag of The Beatles Apple, this H.S. Anderson "Houston" Guitar has nothing whatsoever to do with The Beatles. Its nickname is derived from its body shape, which has been likened to The Beatles' Apple logo as seen on their record labels. (Personally, I think one green apple looks much like another and wouldn't have made The Beatles connection at all). Still, it's an interesting design, and one that I haven't seen before.

According to the seller, H.S. Anderson were responsible for building the original skunk-striped Telecaster style guitar as used by Prince. It was originally called the H.S. Anderson Madcat, but was licensed to Hohner and eventually became the (much sought after) Te Prinz model.
Posted by Gavin Lloyd Wilson at 1:22 pm