We've all seen these cheap guitars on eBay, often with prices that seem too good to be true. If you're like me you'll have said to yourself that one day you'll buy one and give it a whirl, see if it really is as good as the eBay seller claims (and don't they always claim they are wonderful?).

Leo Fender's famous Telecaster design is still as popular as ever after more than 60 years, and is a design that is ripe for copyists. Recently I've noticed several eBay sellers here in the UK who have been importing cheap Telecaster copies in from China and who seemed to be making quite a killing selling them on at sub-£100 prices. Checking the feedback on the sellers' accounts would seem to confirm that these guitars are worth having a look at, so when I saw this black no-name Tele offered at a special knock-down price (i.e. even cheaper than usual from this particular seller), I hit the Buy It Now button straight away. 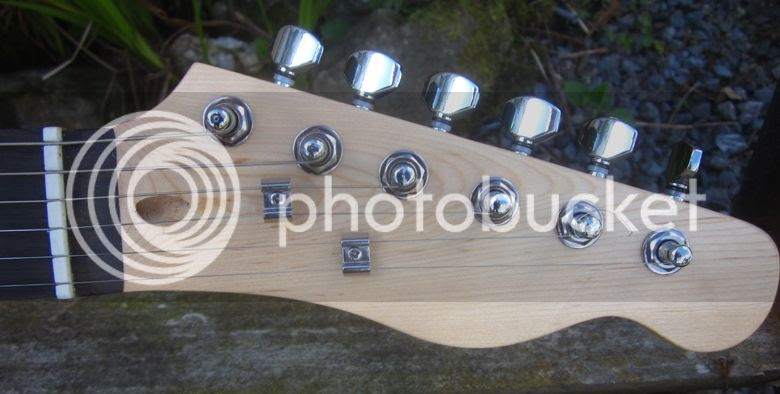 The guitar arrived two days later, which was quite impressive, and removing if from the box, it looked to be a fairly faithful replica of the Fender original. The seller had made claims about the impressive weight of the guitar (apparently with a body made of basswood) and that it could "demolish a house". I must say I didn't quite see eye to eye with him on this particular claim, I think there's a certain amount of advertising BS that we as buyers need to spot and ignore, but the guitar did seem solid enough, nicely put together and finished. It even came complete with a (cheap) guitar cable and a pair of Allen keys, one each for the adjustment of the truss rod and bridge saddles.

The eBay listing already mentioned that "guitars may have minor assembly marks or imperfections as are a custom made item" and whilst I didn't really follow the logic behind that statement, at least it prepared me for a few minor imperfections, most notably a couple of dents in the top edge of the headstock and also the slightly erratic placement of the dots along the top of the fretboard - they were all at the correct positions, but several were not centred very well and the 12th fret double-dot was decidedly askew. But really, these are very minor quibbles and hardly noticeable. Slightly more noticeable was the discolouration of the rosewood(?) fingerboard at the 4th fret beneath the bass strings. A guitar with a fretboard like this would be consigned as a "second" with many quality guitar manufacturers, but it's only a visual imperfection and not something I could care less about. In fact I think it gives the guitar a little bit of character. 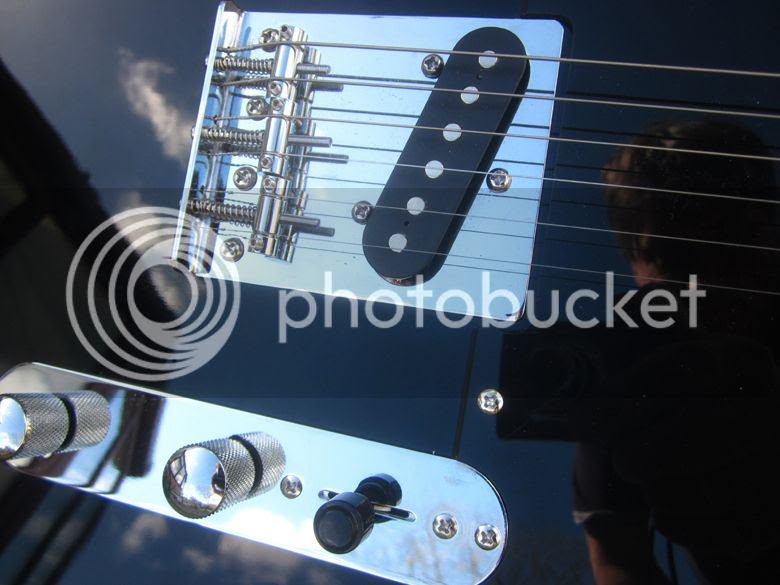 While the bridge is of the three saddle Telecaster variety, it does feature the more modern flat bridge plate rather than the "ashtray" type with an upturned lip on three sides. I must say that I would have preferred the latter as I automatically wanted to rest my right hand against the top side of the bridge but kept ending up gouging my thumb on the threaded inserts protruding from the bridge saddles. It's not really much to worry about and I'm sure I can train myself not to put my hand there.

So far, so good. I'm thinking at this point that the guitar is easily comparable to a Squier-branded Tele, and at a fraction of the price. Even the action and the intonation seem OK; I'm not saying they couldn't be improved upon, but essentially the guitar was ready to go right out of the box. Perhaps it could do with a light fret-dress, a few of the fret ends were slightly rough, but I've known other guitars costing considerably more that far more urgently needed attention in this area.

So, how does it sound plugged in?

Well, it sounds Tele-like, no surprises there. Of course these pickups are not going to be the world's best, but having said that they don't sound bad. If anything they are a little too harsh. I used this guitar at band practice this week and I found I was having to roll off the tone all the time, especially on the bridge pickup (hey, good thing this wasn't a Strat-type guitar!). But yeah, it gives a good Tele twang, and I guess the pickups could always be upgraded if so desired, although a new set of pickups could easily cost more than the guitar itself!

On a less positive note, I noticed considerable hum from the guitar, especially when I removed my hands from the strings. Uh-oh! It's that old problem of a guitar not being properly shielded and/or grounded. 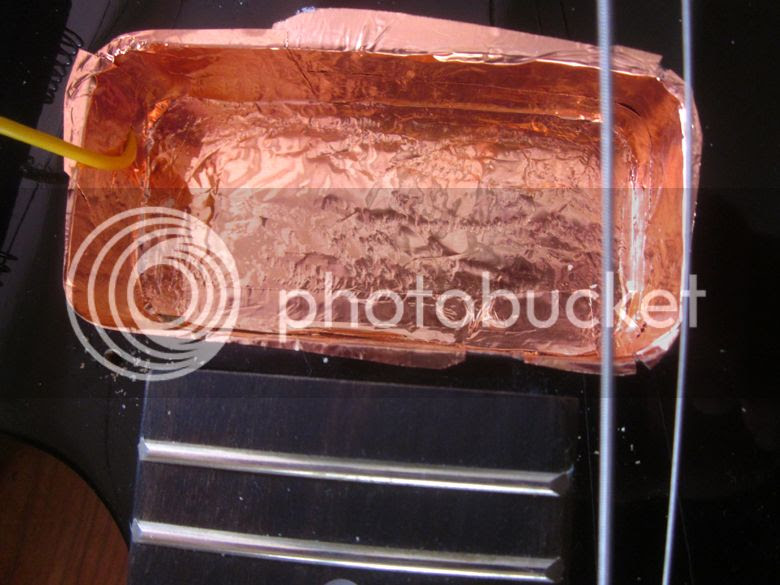 I wasn't going to let this be a problem, and so I bought two sheets of self-adhesive copper foil from another seller on eBay, a very reasonably priced purchase at just over £3 a sheet, and I set about dismantling the guitar and lining the pickup cavities with the foil. Note that the cavity for the neck pickup is large enough to accommodate a humbucker should such an upgrade be required. 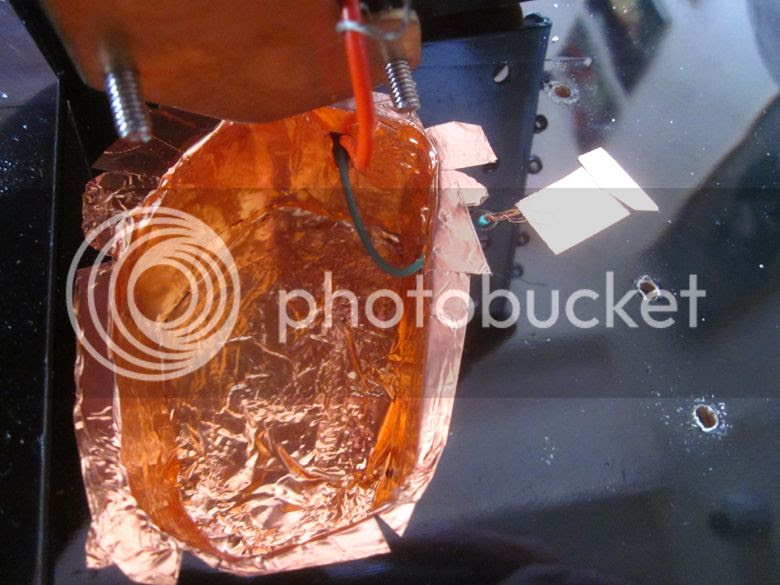 I was thinking I'd need to take a wire from the back of the volume pot and ground it to the bridge plate, but I found that (despite the hum) this had already been done. But just to make sure that contact was being made I spread out the individuals strands of wire and then stuck these down in place with another small piece of copper foil. By the way, that copper foil is extremely adhesive and when the backing sheet is peeled away it has a tendency to curl up and stick to itself. I found it easiest to cut and stick very small sections at a time. It was also tricky getting into the pickup cavities seeing as the pickups and controls were still all wired up together, but I really didn't want to completely disassemble the guitar, and de-solder the pickups, etc. That prospect seemed like too much work. This also meant that I had unscrewed components resting on the top of the guitar, and I did manage to make a few small dents between the bridge and the control plate - I'm not too worried about that, you could say I'd begun to "relic" the guitar. (Actually, I think a guitar with this finish would look better "worn-in", but I'm not about to take sandpaper to it, or to knock it about with screwdrivers or whatever. A few natural knocks I am not going to worry about). 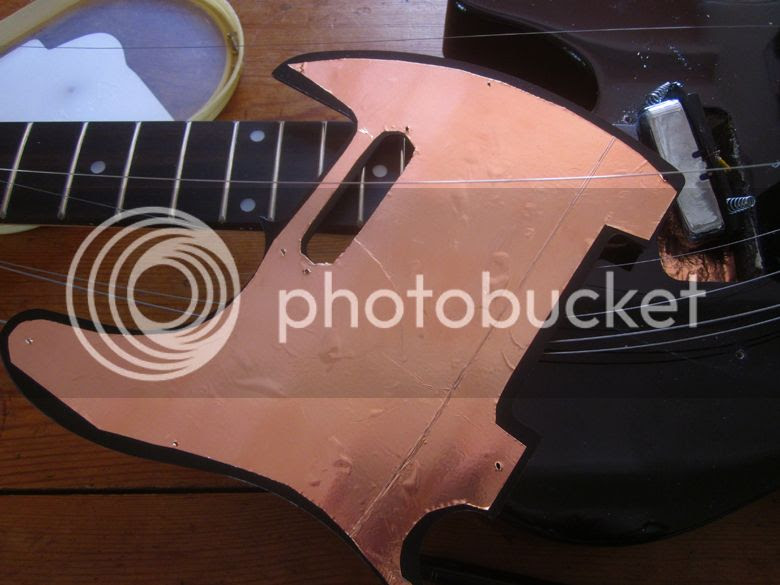 I also decided to shield the reverse of the pickguard; perhaps I didn't need to do as much as that considering it's mostly the timber of the guitar beneath the plate other than the neck pickup rout, but I'm sure it can't harm. This would be a better move on a Strat-type guitar where the plate is covering three pickups. And of course, I shielded the inside of the control cavity, but I forgot to take a photo of this stage. 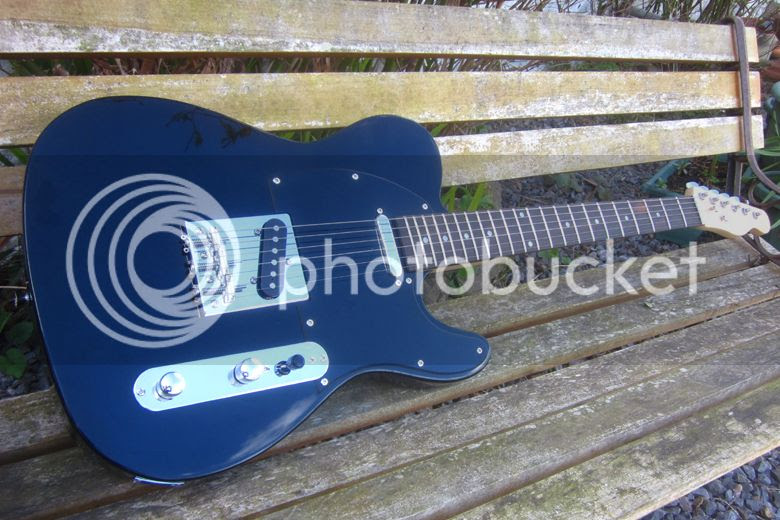 Plugging it in now, it's silent when you want it to be! I'm so pleased that my DIY shielding job, although not the prettiest, worked. And so what if it wasn't the neatest job, you can't see it now the guitar is re-assembled.

Definitely! I am really pleased with this guitar, and I'm sure it'll prove to be a very useful addition to my small arsenal of guitars. I would recommend these guitars to anyone wanting a cheap T-type, with the only proviso that you need to be prepared to do some tweaking. In my case it was shielding the guitar, but some might have other set-up issues.

As for the blank headstock, I would NEVER put a Fender logo on there. That would just be a lie, whereas I'm happy to tell anyone that this is just a cheap eBay guitar.

© 2013, Guitarz - The Original Guitar Blog - the blog that goes all the way to 11!
Please read our photo and content policy.
Posted by Gavin Lloyd Wilson at 5:00 pm