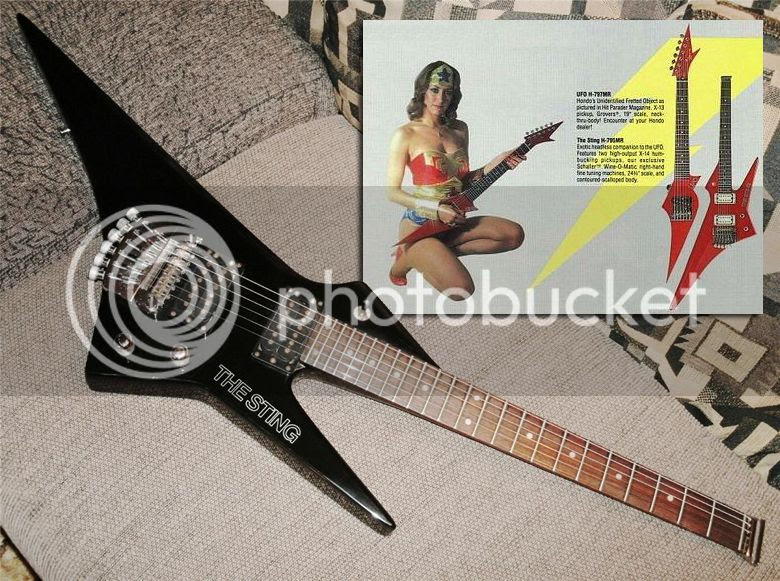 From the early 1980s (circa '83-'84), here we see a Hondo H-795 MR "The Sting" guitar, a relative of the also super-pointy Hondo II H-1 which differs slightly in design by actually having a headstock - and a very pointy headstock at that - thereby significantly increasing the chances of someone getting impaled on stage.

Weirder still, there was even a companion guitar to "The Sting" that looked as if it had been built from an offcut from The Sting's body. I'm not sure what Hondo's marketing people were thinking here; I guess you could stick the two guitars neatly together with velco for a doubleneck that easily converts into two single guitars (but perhaps that's going off into the realms of fantasy). And if that wasn't weird enough for you, they drafted in Wonder Woman to pose with the guitar in the ad. "Random", as the kids say.

This particular Sting is currently listed on eBay with a starting price of $899.99, which is almost unheard of for a Hondo, but as the seller points out only about 50 of these were guitars were produced.

© 2013, Guitarz - The Original Guitar Blog - the blog that goes all the way to 11!
Please read our photo and content policy.
Posted by Gavin Lloyd Wilson at 9:31 pm