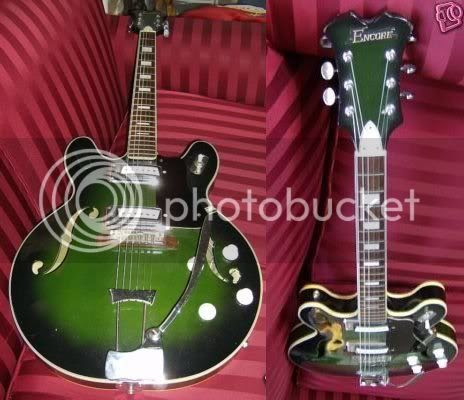 Ever get that sense of déjà vu? This is another 335-inspired archtop semi-acoustic guitar, looking rather similar to yesterday's Eko, but this one was made in Japan.

What intrigues me about this guitar is that it carries the Encore name. I'm pretty sure this isn't the same Encore that we know in the UK today (as distributed by John Hornby Skewes) and whose guitars are firmly aimed at the budget end of the market.

I'd say it was a pretty safe bet that our Encore guitar pictured here (nice greenburst, by the way) dates from the 1960s.

Does anyone know anything about this other Encore brand? I'll wager that it was just another brand name and that there was no Encore guitar manufacturer as such. The guitars were probably made in the same factory as Japanese guitars bearing various other brand names. The pickups certainly look familiar.
Posted by Gavin Lloyd Wilson at 1:48 pm