Andy's done it again! Following his Les Pew guitar build, Andy found he still had some offcuts of the church pew he'd used left over.

I'll let him take over and tell you the story in his own words:

Here's my home made headless bass. It has a pine body made from wood from a 1856 church pew and keeps the original finish! (We've been there before haven't we?) The hardware and neck are from a Westone Thunder I-A. Unlike other headless designs it uses the original standard bass tuners which are spaced apart by running the outer (E & G) strings around rollers which were made from the Westone's brass control knobs!

The body is largely hollow and contains the active electronics and two 9 volt batteries (the lower fin or wing unbolts to access them). I feel my mini head is a better idea than the 'standard' headless design as it does away with any wood screws going straight into the neck's end grain and weakening it, also it prevents any string tension being transmitted into the fingerboard which could cause the glue to fail and the board detach from the neck.

It has a great vibrant tone (far better than the Westone's muddy thud!) and sounds quite loud acoustically. It also balances perfectly on a strap and on your lap. (More by luck than judgment!)

Please post you comments, either good or bad I'm interested in what you make of it! And I'll try to answer any questions.

More guitars, etc, on my myspace.

It's nice to see imaginative recycling such as this in action. Andy claims that this build didn't cost him a penny!

UPDATE: Andy has provided some more photos so as to better illustrate how the tuners are located. 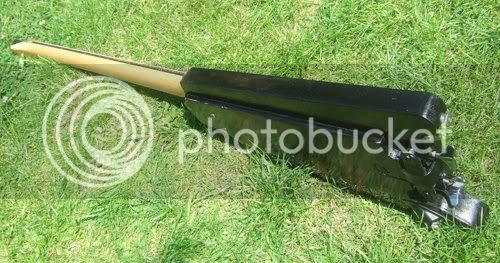 Andy says that the roller support bracket in the tuners photos was made from a bracket from an old school chair!
Posted by Gavin Lloyd Wilson at 3:55 pm