A rant about inappropriately used decals 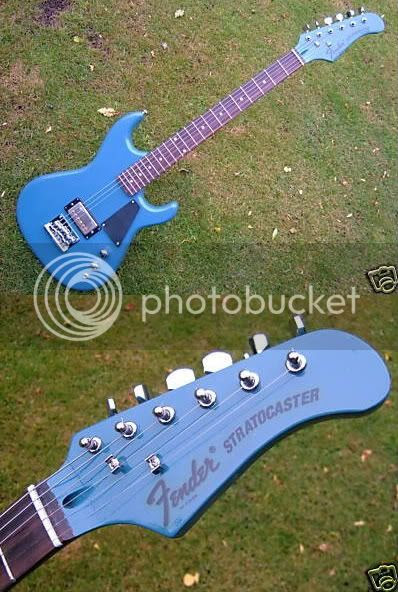 You see it time and again on eBay. Someone builds a "Bitsocaster" guitar - a Strat or a Tele type guitar assembled from spare parts, and they apply a Fender decal to the headstock. In the listing they may say that "This is not a Fender", but in that case WHY put the decal on there in the first place? I do not understand this peculiar way of thinking.

If I play a Strat or a Strat-a-like that is not a Fender then I DO NOT WANT it to say Fender on the headstock. It would be a lie, pure and simple. (Actually, I have five Strats/S-type guitars. Two are Japanese Fenders - a blue flower Strat and a candy apple red 12-string, one is a Japanese Sanox Sound Creator and has that logo on the head, another is my DiMarzio/Charvel which has no logos at all, and the final one is my Feline Holy Panther which sports the Feline logo on the headstock although seeing as the body is from a genuine 1970s American Fender technically it's more Fender than much of the crap bearing that name that you see on eBay.)

How would a copy guitar benefit from having the Fender logo on it? The only answer I can think of is so that the player can pretend that they have the real McCoy, which is a bit sad really.

The same goes for Squiers. If you play a Squier, be proud of it and don't replace the logo with a Fender one. There's nothing wrong with playing Squier guitars, most of which are excellent guitars in their own right. I don't see the point in pretending they are anything else.

What is worse is that there are guitars which aren't even copies that people are slapping the Fender logos on. You see Fender decals appearing on all sorts of weird un-Fender headstocks.

Take a look at this example as pictured above. The diminuitive body is almost certainly from a 1980s Encore starter guitar and is made from MDF. The neck may or may not also be Encore. OK, so the guy has done a nice spray job on it with that blue finish, but it is so definitely not a Stratocaster or even an approximation of one, so WHY put the Fender Stratocaster logo on it? Look at the shape of that headstock! Who does he think he's fooling? Or does he genuinely think it looks like a Stratocaster?
Posted by Gavin Lloyd Wilson at 1:00 pm