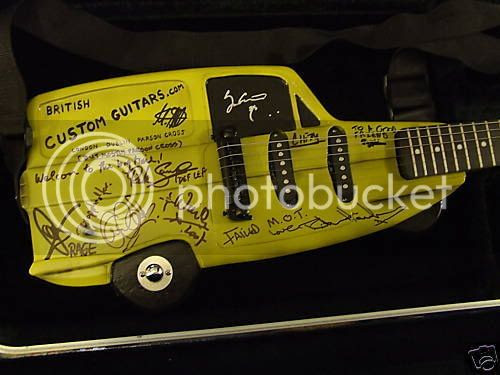 From the seller of yesterday's BSA engine casing guitar also comes this guitar based on the delapidated 3-wheeler van used by Rodney and Del Boy Trotter in top-rated BBC sitcom "Only Fools and Horses".

Strangely, it's been signed by diverse artists such as The Arctic Monkeys, Rik Savage of Def Leppard, Yngwie Malmsteen, Michael Angelo, Paul Carrack, and many others. I wouldn't have thought some of those would even have known what the guitar was supposed to represent. Unless Yngwie is a secret Only Fools and Horses fan. Who knows?

Personally, I'd have preferred to have seen it signed by David Jason and Nicholas Lyndhurst.
Posted by Gavin Lloyd Wilson at 12:37 pm