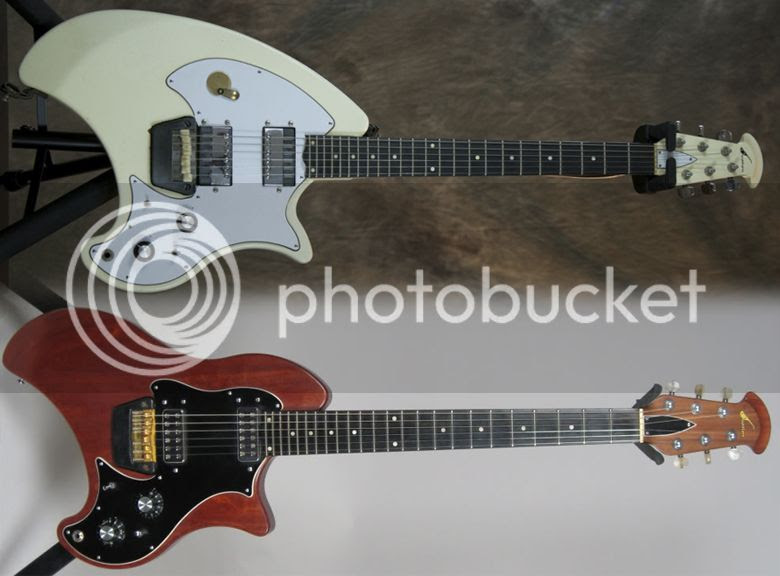 These two different Ovation Breadwinners currently listed on eBay illustrate quite nicely how the instrument had evolved over the eight years or so during which it was part of the Ovation catalogue of instruments. One of Ovation's earliest solidbody electric guitars, the Breadwinner, introduced in 1972, is known for its serendipitous ergonomic shape and for being one of the earliest production guitars to be equipped with an onboard active FET preamp.

The white Breadwinner at the top of the picture is quite an early example, although not one of the earliest. The first Breadwinners had the output jack on the side of the guitar just inside the rear cutaway, which was a bad move because that rear cutaway is the perfect place to rest the guitar against your right leg when playing seated. Ovation very wisely relocated the socket to the front of the guitar, which is where you'll find it on most models. Other features of this example are the textured "LyraChord" finish (colours available included blue, white, black, tan, grey, and red), the nylon bridge saddles, and the large toroidal single pole pickups.

The Breadwinner Limited seen at the bottom of the picture dates from 1980 when production of the Breadwinner had effectively stopped. The Breadwinner Limited model was an exercise in using up old stock. In a move similar to Fender CBS remodelling the bodies of Fender XIIs and five-string basses to produce new models, the Maverick and the Swinger, Ovation re-sculpted Breadwinner bodies with a cut-away on the top edge to give the guitar a much sleeker look. Finishes were usually natural (which had previously only been the domain of the Ovation Deacon - the deluxe version of the Breadwinner), although some examples were available in a "Tuxedo" grey to black finish. The pickguard is also much smaller, and pickups are Ovation's own mini-humbucking units. The bridge saddles are of brass which probably is more durable and allows for better sustain than nylon. Apparently approximately 500 examples of the Ovation Breadwinner Limited were produced.

(Incidentally, my own Ovation Breadwinner is right inbetween these two styles. It has the original shape but with a glossy black finish in place of the more usual LyraChord textured finish. The bridge has brass saddles and the pickups are mini humbuckers mounted on the smaller version of the pickguard.)

The Breadwinner Limited is currently listed on eBay with a Buy It Now price of $1,799. This listing is due to finish later today, although I suspect that it won't sell and will probably be re-listed. Even though the Limiteds were rarer, I feel that the price for the white Breadwinner is probably the more realistic of the two.