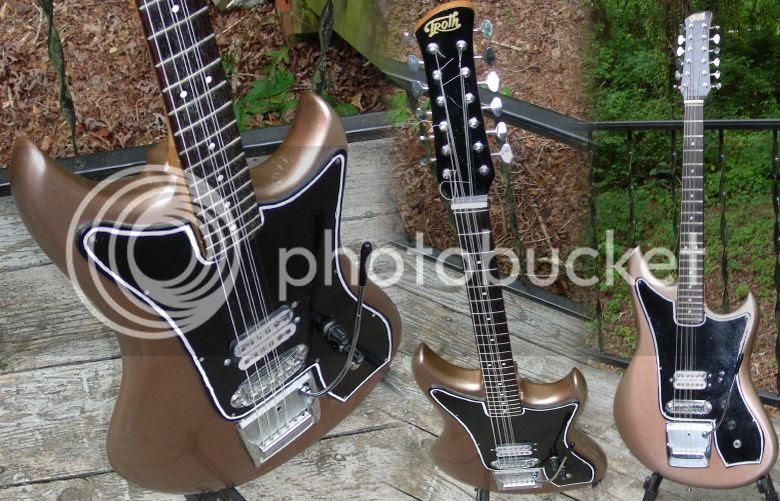 As a particular fan of these early Yamaha solidbody guitars, I do find the "customisation" carried out on this particular Yamaha SG-12 rather distressing. Not only has it been inexpertly painted gold (and with some meaningless name applied to the headstock for who knows what reason), but it is missing the original pickguard, pickups and electrics. The current pickguard is an ugly handcut affair, not helped in being a hefty quarter of an inch thick.

I only hope that whoever did this to such a fantastic old guitar, perhaps didn't have the guitar in a state of completeness to begin with (in which case, someone before must have messed it up).

This guitar is currently listed on eBay, and with one day left to go before the auction finishes the bidding is currently at £399. If this guitar was in original condition, I'd expect it to sell for at least $1000. There was recently another SG-12 on eBay which, alas, was incomplete - there were parts missing such as bridge saddles. That particular guitar sold quite cheaply. It'd be nice to think that whoever bought that one, could buy this example too and assemble a single Yamaha SG-12 as it should be and keep the rest as spares.

[EDIT: The story of this guitar does not end here. Click here to see what happened next!]