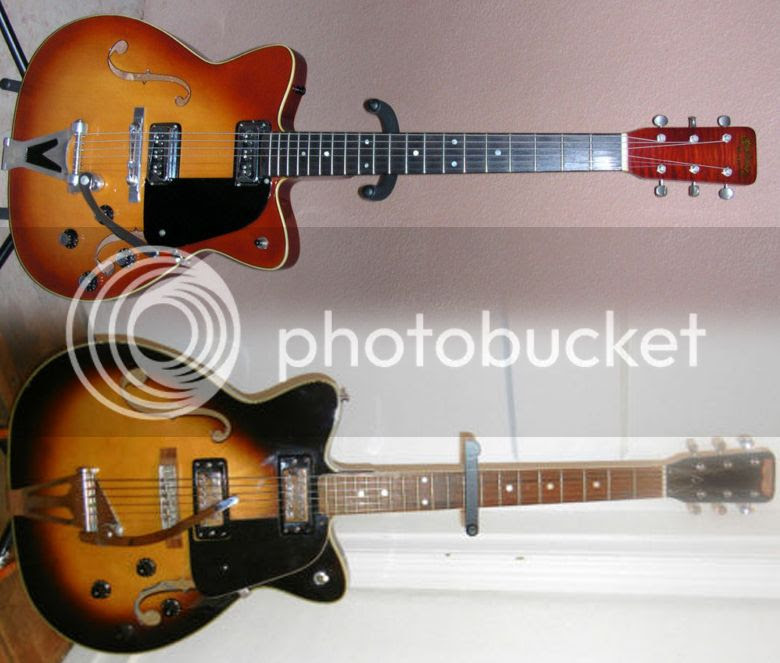 Further to our recent post about the Martin GT-70 hollowbody electric, pictured above at the top of the photo montage is another slightly better known electric guitar from the company known for their high-end acoustics, namely the Martin F-65. We have looked at this model previously here on Guitarz; it was produced between 1962 and 1965 (the example pictured is from 1964) and approximately 1,800 were made.

Whilst not as rare as the GT-70 the F-65 is still considered to be reasonably rare and is a desireable model today. This particular example is currently being offered for sale on eBay with a Buy It Now price of $2999.

Contrast this with the near identical looking guitar at the bottom of the photo montage. This is also currently listed on eBay but has a Buy It Now price of a very resaonable sounding $325. This guitar is actually a Japanese copy of the Martin F-65 and carries the St Moritz brandname. This copy is probably even rarer than the real thing, but as I have explained before, rare does not necessarily mean valuable.

Placed side by side you will notice some discrepancies. Hardware - pickups, bridge, vibrato - are obvious candidates for difference, but there are other minor differences such as the slightly over-sized f-holes and pickguard on the Japanese copy. The most obvious difference that is not apparent from the photos I have used here (so you will have to take my word for it) is that whilst the original Martin guitar has a glued-in set neck, the copy has a bolt-on neck.

I'm sure that with the Martin's set neck and DeArmond Dynasonic pickups that it's going to be the better sounding and playing of the two (and costing so much more I should think so too) but it would still be fun to get them both together and do a comparison.