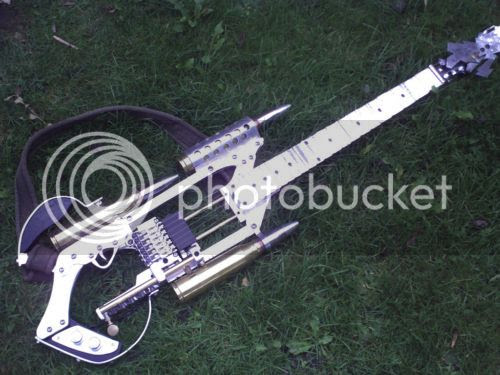 I make no secret of the fact that I dislike guns intensely and have absolute contempt for that old cliche, the guitar shaped like a gun.

However, this 30mm Lock n Load custom guitar, which still looks like some piece of military hardware, I find quite intriguing. It does have a "steampunk" feel to it.

It has a sliding pickup on a bolt-action system allowing it to be set in any one of six positions. The neck is aluminium (it looks like it could benefit from some wooden inserts on the rear - see video) and the integral fingerboard is stepped, a la Bond Electraglide.

In the seller's favour is his refreshing honesty when telling us that the guitar weighs a whopping 15.4lbs/7kg and would be "only good for one song at a gig".

See more of the guitar here:

It's not really to my taste, but is still worthy of including here on Guitarz as an example of something quite unusual.

EDIT: As Big Red X points out in the comments, this would appear to have been made by British Custom Guitars.