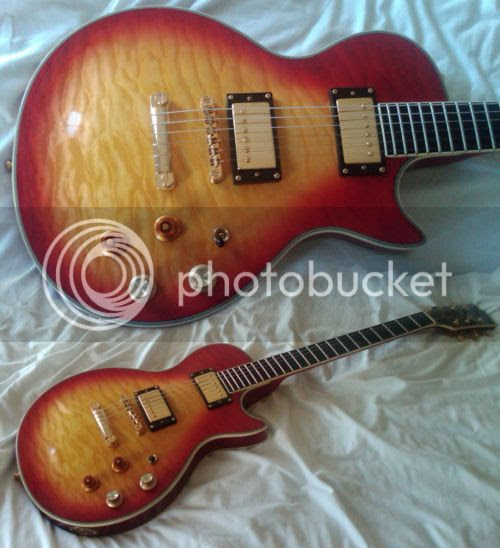 Here's what the current owner of this guitar has to say about it from the eBay listing:

I bought this guitar new around 18months ago through eBay and I've been delighted with it.

It was bought as a prototype model for a company called Bluesbelle and as such the fit and finish is excellent (presumably this guitar was used to secure sponsor funding and retailer orders).

The guitar has a mahogany body that is slightly slimmer than a traditional Les Paul. It has 5 ply binding to the body and highly figured quilted front and rear caps (even the cavity cover is quilted!!). The neck is bound and features 22 well dressed jumbo frets on an ebony fingerboard with side-markers. The guitar features gold hardware throughout.

The guitar has been upgraded to include a set of Tonerider Alnico 2 Classic Humbuckers (pretty much Gibson Burstbucker 2 & 3 copies) with 500k CTS pots, mullard capacitors and 50's spec wiring, a set of sperzel style locking disc tuners have been added to aid tuning stability & mismatched knobs have been added to aid adjustments when singing and a bone nut has recently been fitted and cut by my local luthier. The headstock features an inlaid Lucky Clover logo and no manufacturer name.

I bought it for around £300 and I felt it represented something of a bargain given the specification. Since then I've spent in excess of another £100 on upgrades.

The original seller stated they were expecting the retail model to have an RRP of £599 and I see no reason why that wouldn't be the case as it plays as well as other similar mainstream overseas guitars in that price bracket eg. ESP, Epiphone, PRS SE etc. I've only seen one other that was identical to the original spec of this guitar but it was a tobacco burst finish with the manufacturers name on the headstock and it was been offered for sale at £495 second hand...

Now, I'm not normally into quilted or highly figured tops, there is something a bit precious about them, but overall I like this guitar. It is definitely my kind of Les Paul. I think the feature that absolutely clinches it for me is the location of the pickup selector switch, i.e. down by the other conrols. I really dislike the positioning of the selector switch on regular layout Les Pauls both from a practical viewpoint (I always end up hitting it by accident) and from an aesthetical point of view (sitting up there on its own it looks like a pimple on someone's arse).

So, I wonder what happened to Bluesbelle guitars? I guess the venture ran out of steam and/or money. Still, it's nice to see this prototype and were I in the market for an LP type guitar right now I'd have to give it serious consideration.

Currently for sale on eBay UK with a Buy It Now price of £250, which -if the guitar is as great as the seller suggests - sounds like a bargain.