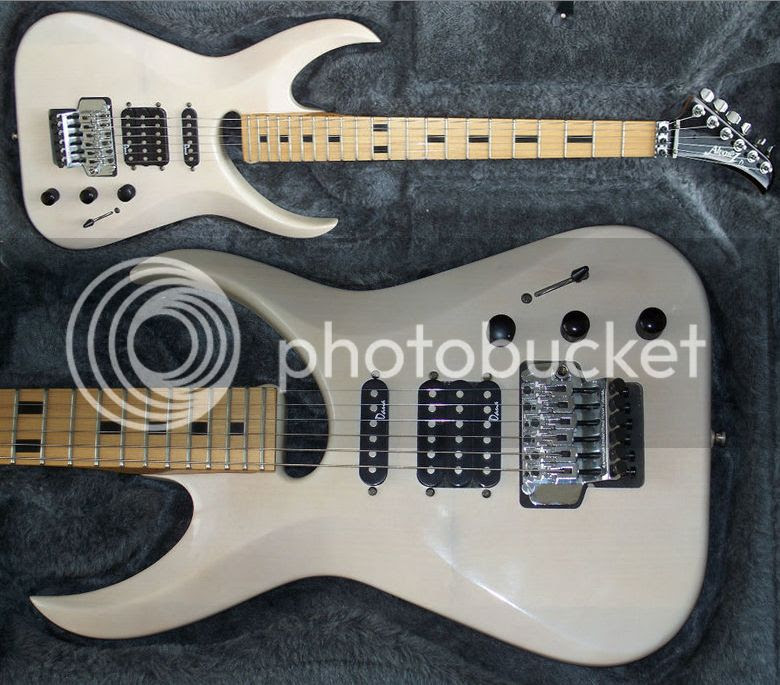 It's funny, these Alvarez Dana Scoop guitars with the most extreme cutaway imaginable were everywhere for a brief period in the mid 1990s and then vanished almost without a trace. I can only assume that the styling dated very quickly and players didn't want to be seen with such guitars. I'll wager there's a lot of these cased up under beds and in attics.

Despite their prolonged absence, a couple of these guitars have turned up on eBay recently. This white example is, to give it its full name, rank and number, an Alvarez Dana Scoop AE650TRW featuring a licensed Floyd Rose trem and TriForce pickups. According to the seller, the "Tri-Force/single coil system [...] produce[s] humbucking, single coil and 2 single coil tones". I guess that means there some series/parallel options in there, as well as coil tapping which is implicit. Of course with no physical space in which to mount a neck pickup, a system such as this is desireable so as to squeeze as many tones as possible out of this guitar.

This guitar is currently being offered for sale on eBay for a not unreasonable $549 (so long as this guitar isn't too mid-1990s for you).

See also this post which generated quite a few readers' comments when we looked at a similar guitar.