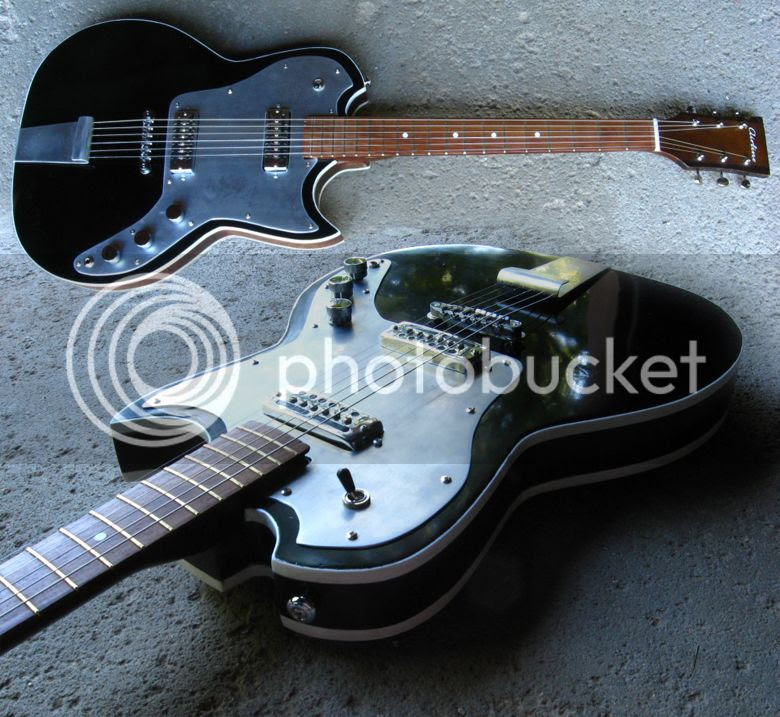 Here's an email I received this morning about the above-pictured guitar:


I've been a reader of your blog for a little over two years, and I assured myself that if I finished a significant project- I'd send it in to Guitarz. That being said, writing this email is proving to be a rather frightening experience. I'm well aware that the mutilation of vintage musical instruments is a practice that's frowned upon by you and the vast majority of your readers. (A Peavey Predator that someone went after with a jigsaw a few weeks back comes to mind.)

Your write up of this project may very well read like a scathing greatest hits of your favorite amateurish DIY criticisms, with the situation worsened by the fact that I'm attempting to sell it. I'm not saying this in the hope that you'll pull punches- I'm just acknowledging that I understand what I'm getting myself into.

Could this conversion of an old Airline acoustic into an electric guitar be considered sacrilege? Well, I think we'll leave that question for the devoted Airline fans to decide on. For myself, I think it looks fantastic. There's a major difference between your customized Airline and the crudely chopped-up Peavey that you mentioned. The Peavey was a completely inexpert bodge-job that just ended up looking like an abomination. As a contrast, your customization of the Airline guitar seems to have been carried out with some reverence to the brand; it's sympathetic to the style and vintage nature of Airline Guitars and the era from which they come from.

I'm intrigued as to what the acoustic guitar was like at the start of the project. (Any pics?) I'm hoping that it was an instrument that had seen far better days, and that with your electric conversion project that you have actually enhanced the instrument. I mean, the Airline collectors might argue that it should have been kept as a museum piece, but what's better: a guitar hanging on a wall or in a display cabinet, untouched and unplayed, or a guitar customized and brought back to life which is ready to see years and years more playing action?