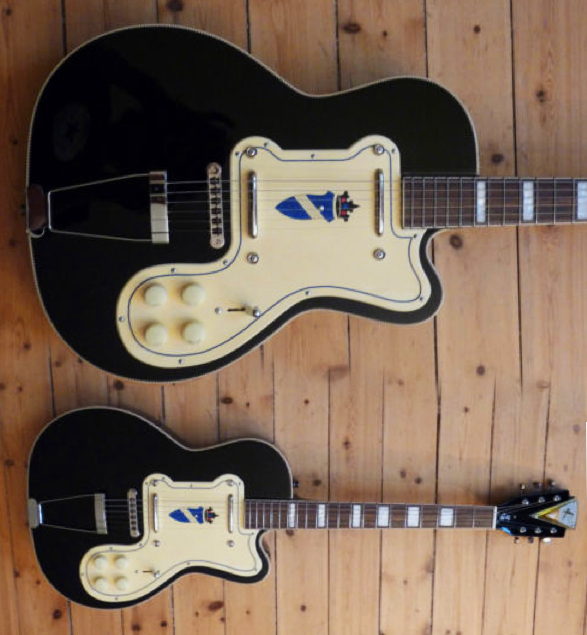 A certain taste for vintage guitars that may transpire in my posts on Guitarz is in no way a nostalgia for a lost golden age, nor a cult of the origins (who could seriously believe that by some miracle the (almost) first three solid body electric guitar models ever conceived and produced in the 1950s by different companies are perfect and unsurpassed since?) It's just that at some point there've been a global explosion of creativity in guitar making following the invention of the instrument and of the music that fit with it, and there is a lot to learn from it.

You had the same happening in the 1910s, within a few years art and history changed radically due to creative emulation of artists all over the world, and one century later people are still trying to digest, explore and expand the potential of the historical avant-gardes: cubism, futurism, constructivism, dada, fauvism, neoplasticism, etc... Same in music with the 1960s British invasion or the late 1980s rise of electronic music.

And something happens in every domain and all the time, you have people who create things, and then you have people who bank on them - these things require different skills and spirits, so it's rarely the same people. You have also times for creativity and then you have times for making money - we're living such times when it comes to guitars... Imagine that in computers: people would buy huge slow square grey IBM PCs because they're so cool, and that's how Don Estridge invented them back in the day!

Anyway, let's go back to vintage guitars: there are roughly four things you can do with vintage guitars: you can preciously collect old instruments, hoping to get one in mint condition but a beaten one is also cool, and worship them while they gain more value year after year and end up keeping them in a safe. You can copy classic models again and again because, you know, that's the way Leo and Les did them and there's nothing more to do - and it sales -, and saturate the market until people cannot even imagine anymore that there are other guitars out there. You can re-issue vintage creative models so you can benefit from the vintage trend while diversifying and rejuvenating the offer, and as wrote 18th century French poet Antoine Houdard de la Motte: "l'ennui naquit un jour de l'uniformité (boredom was born from uniformity)" (now find other guitar blogs quoting 18th century French poets!). Or you can study the great guitars from the past, get inspired by their audacity with the distance given by time, and create the guitars of the 21st century!


The re-issue is a good starting point, and it's happening more and more since Eastwood started the trend in 2001. Now you can find Eko's lovely guitars new and functional, and reissued 1952 Kay Thin Twins.  This is not the original Kay company that provided so many budget guitars to American players between the 1930s and the 1970s (remember that Kay claimed to have produced the first electric guitars, using pickups several years before Gibson - historians must work on that!), but it's not like we're talking about high-end handmade guitars made by master luthiers in an hidden Shaolin temple. The Thin Twin got its name from its thin blade pickups sticking right out of its hollow-body. It's the kind of instrument on which blues became rock'n'roll out of the spot-lights...