All of us are looking at the stars 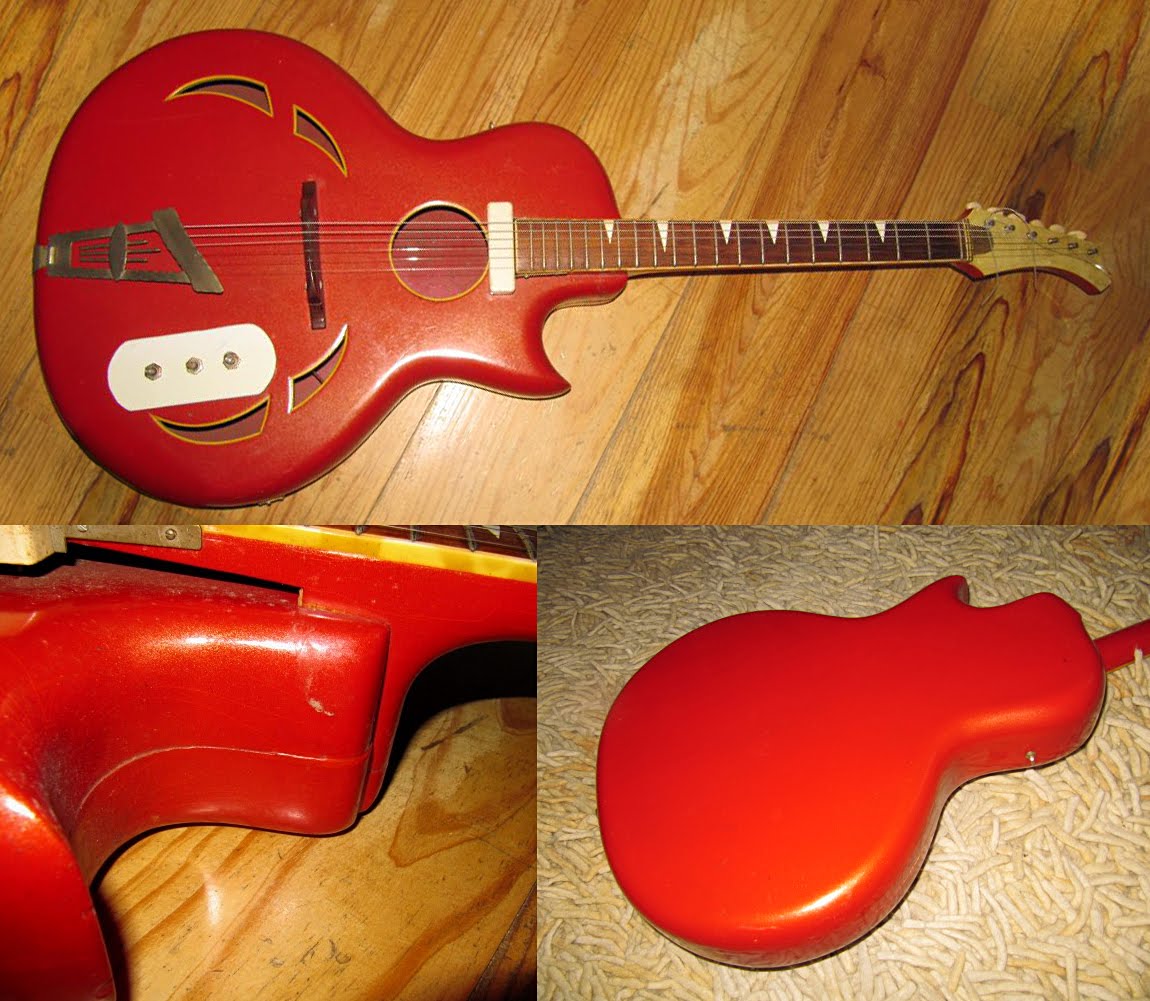 A Migma Star 61 to be exact. Maybe. It's hard to tell really as every search I've made has revealed a whole range of different Migma guitars claiming to be Star 61s. This one doesn't have the typical Migma tailpiece either. Anyway...
We've all heard or used the expression "a Mickey Mouse guitar", I'm sure. Well, for this seller, his Migma Star 61 has always been his Kater Karlo guitar because it looks like a cartoon (Kater Karlo is the Disney character - Pete - sometime villain and general tough guy). He says the model is rare and, if the paucity of Google searches is anything to go by, he's right. It has a large, thick body, of which he says, "What is the material of the body - no idea, it looks as if he had joined like two halves of bread. Maybe it's made ​​of fiberglass, is certainly very hard. It has a slight Flitteroptik (glitter effect, I guess). You can see on the photos that all the edges of the body are rounded off.
"Contrary to expectations, the guitar is very playable, the pickup works, although only one of the pots seems to function".
The guitar has its own design quirks such as the chunky pickup and the rather haphazard placing of the control panel but it's undoubtedly a Star guitar.
A little research indicates that these were probably not fibre glass but carved wood. There is a seam showing but the joint looks pretty accurate and there's no strip to hide the join like with a Res-O-Glas guitar. Someone once showed me how make a very tight fitting guitar case by making a box to size and then splitting it with a bandsaw lengthways to leave two perfect fitting halves. Maybe this uses a similar approach.
A little more research on http://www.schlaggitarren.de/home.php?text=hersteller&kenn=87%20mfg reveals that "Lothar Junghänel is the inventor of the extravagant "Star Series". They were designed by him and built in Zwickau, and later manufactured under license by Migma.
He celebrated his 82nd birthday on 20/05/2011. His son Hanno Junghänel contacted schlaggitarren and soon they will publish a detailed article on the history of Star & Starlet instruments, and its inventor."
Schlaggitarren also have some nice photos of other Star models and their designer plus a lot of other interesting guitars, so it's well worth checking out.
David in dull and dismal Barcelona Brrrrrrr! Anyone got a brolley?
© 2011, Guitarz - The Original Guitar Blog - now in its 10th year!
Posted by Bat Tao Lo at 7:36 am