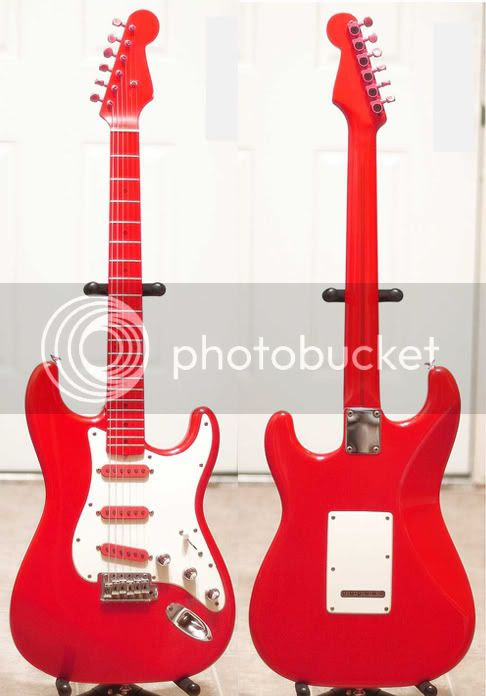 I'm not JP Stratoblogster but if I was I'd choose this as my Strat for Friday.

OK, so it's yet another Strat-type guitar - nothing unusual about that, but WOW! isn't it so very very red? I've certainly not seen the neck and fingerboard coloured in this fashion before. Not on a Strat anyway. I have to say, I really like it.

DiMarzio, of course, are known mainly for their pickups, but back in the 1980s they put their name to a full range of spare parts from hardware to bodies and necks. These days, I believe, they tend to focus mainly on pickups. This red beauty is apparently one that they built for display at the 1984 NAMM trade show. I bet it turned a few heads.

Unless you don't like red, of course. My nephew, being a Manchester United supporter, would LOVE it (anything red is good in his book), but he's going to have to make do with the Jaxville "relic" guitar I already bought.
Posted by Gavin Lloyd Wilson at 5:09 pm