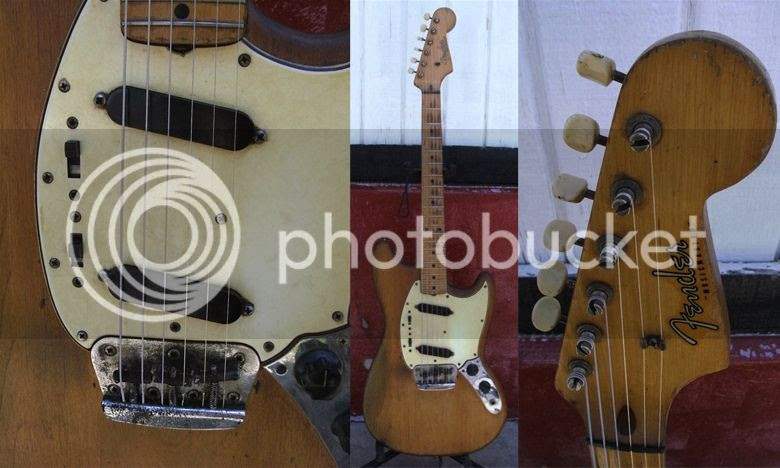 This is a Fender Frankenstein job with a 1965 Duo-Sonic body married to a 1959 Musicmaster neck, currently being offered for sale at Krazy Kat Music in San Antonio, TX. It's a great looking guitar; it appears to be a natural relic (as opposed to an artificial relic), and looks like it's seen plenty of action over the years.

Now, I don't know about you, but I get confused by the various "student" models that Fender put out between the late 1950s and 1970s. The Musicmaster, Duo-Sonic, Mustang and Bronco all look to be remarkably similar.

Well, to put it briefly, the Musicmaster and Duo-Sonic were originally deigned in 1955 and were essentially the same guitar but with single and twin pickups respectively. Because they were aimed at students, i.e. often younger players, these guitars had a short scale length of 22.5".

Early examples had a body that was even-waisted, but from 1964 - to keep in line with the newly released Mustang - the body was now slightly offset. These models were re-labelled Musicmaster II and Duo-Sonic II.

From this period all three guitars - Musicmaster II, Duo-Sonic II and Mustang - were offered in a choice of 22.5" and 24" scale lengths.

The Mustang and Duo-Sonic II were essentially the same guitar but with the Mustang featuring a tremolo system (the Fender Dynamic Vibrato tailpiece, similar to that which appeared on the Jazzmaster). Both guitars had pickups with adjacent on-off-on switches that allowed the pickups to be selected in or out of phase. Used together, they could function as a humbucker.

Another related guitar is the Fender Swinger, a short-run guitar released in 1969 by the CBS-owned incarnation of Fender, and which used Fender Musicmaster parts on a chopped and re-modelled body from the unpopular Fender Bass V.