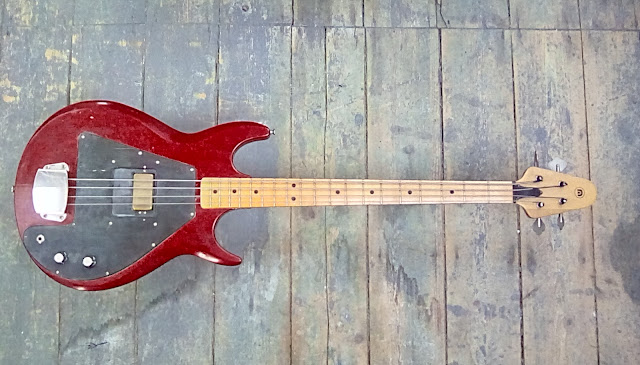 If any of you still regularly tune into Guitarz these days, you may have noticed that when I'm not posting about piglet-shaped guitars, that more often than not my attention will be on basses. There's a good reason for this as some might call me a "born again bassist". But yes, this is where my main interest lies as the bass is what I like playing the best.

Now, moving on to the matter in hand, although we have looked at the Gibson Grabber bass before on this blog, what we have here is a cheaper copy which I'd imagine was contemporaneous to the Gibson Grabber itself, produced between 1973 to 1983. (I can't imagine that copies were being produced after the real deal had ceased production, but you never know). My feelings are that this particular example would have been produced in the latter end of that period, probably more towards the beginning of the 1980s. This gut feeling is mainly based on the headstock logo, a stylised letter "M" which does have a distinct 1980s vibe to it and which replaced the "Melody Guitars" italic script as seen on earlier examples. 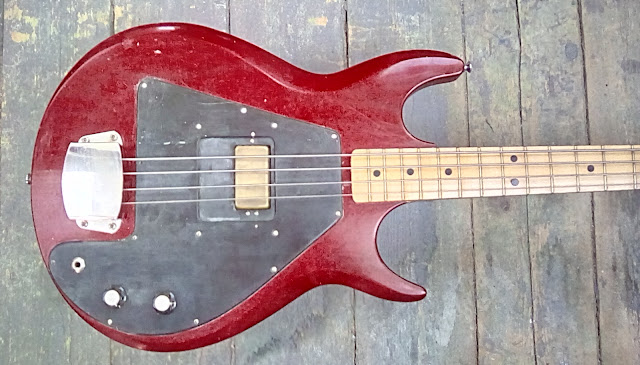 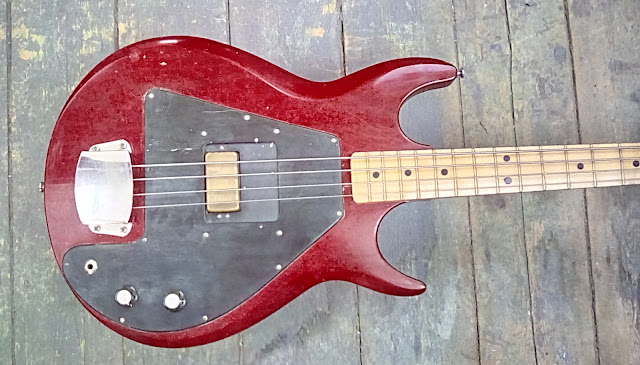 Of course, the Grabber was famous for - and named after - its single sliding pickup, which admittedly doesn't have a lot of travel, and on this copy the sliding pickup is all present and correct and seems to be working properly. In the above two photographs we see the pickup in its forward and rear positions respectively.

The metal pickup cover does appear that someone may have painted it at some point, or else removed paint from the upper surface which is now bare metal whereas the sides show scrappy black paintwork. The pickguard itself seems to be made out of... well, I want to call it bakelite; it has all the appearance and texture of that very dense black proto-plastic as famously used for the manufacture of 1950s-style dial telephones. 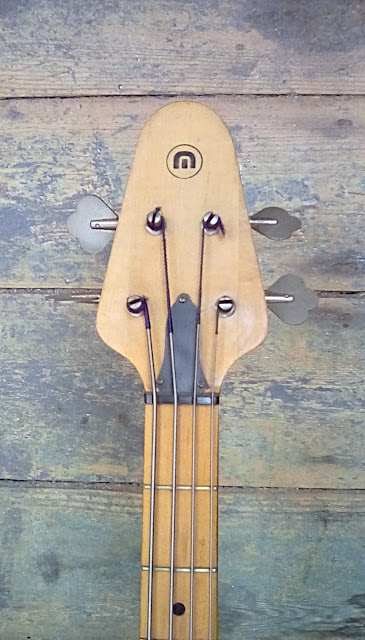 Here's that Flying V style headstock with the 1980s-style "M" for Melody logo. 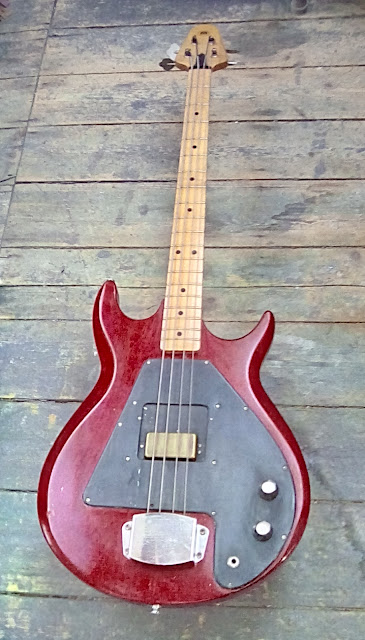 The bass is very heavy. The neck and fingerboard are Maple, and I suspect that the body is likewise. The neck is chunky and highly reminiscent of a baseball bat. Scale length is a un-Gibson-like 34", but the fact that they were playing around with several bolt-on neck designs during that whole period was another un-Gibson-like characteristic. Underneath the cover (often removed and thrown away) the bridge is a 2-saddle affair reminiscent of the Fender '51 Precision/Tele-bass style. 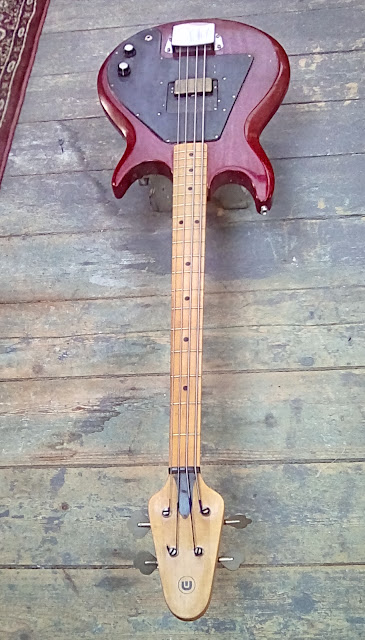 But of course, this isn't a Gibson, it's a Melody.

Melody were actually an Italian guitar manufacturer, and had affiliation with Eko guitars. For some history the company, I couldn't tell it any better than FetishGuitars.com, so pop on over there and have a little read up! 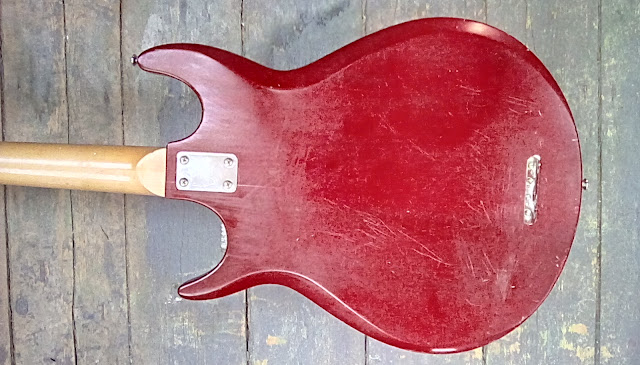 However, this is one of Melody's later range of guitars and basses when they moved away from original designs and got onto the whole copy guitar bandwagon, that era of instrument production often erroneously referred to as "lawsuit" guitars. It's also highly doubtful that this is an Italian-made Melody. It's much more likely this is a Melody branded instrument originating in Japan (Dare I say "Matsumoku"? I don't know, but I have seem that name bandied about on forums discussing Melody guitars). Identical guitars and basses from the same production line would also have been badged up with other brand names. Grabber basses such as this were also offered with Aria, Avon, Cimar, MIA and Eagle branding. 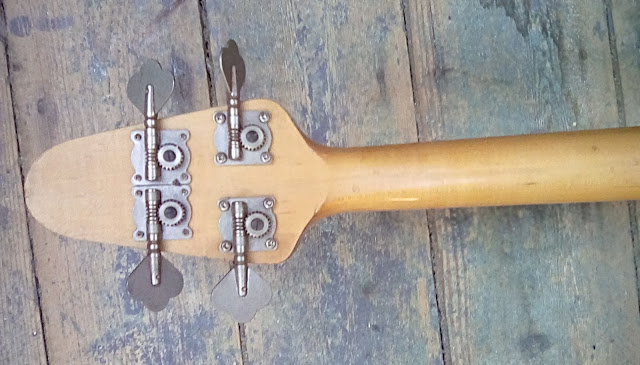 I'm lucky to have been given this bass by a friend, a dealer who got it as part of a job-lot of guitars he was buying. It needs some cleaning and some TLC. The action isn't too horrendous and hopefully it can be tweaked to make it more playable. The pickup seems to work fine but I had trouble differentiating between the tone of the pickup in its different positions; admittedly I haven't trialled the bass properly through my gigging bass rig yet, I merely used a practice amp to check it was working. Pots are scratchy, but you'd expect that on an old instrument like this. The E-tuner is a bit dodgy too. If this bass looks like a keeper, I'll consider swapping the machine heads for something more modern and more reliable. (Note also, by the way, the different size screw-head on the rear of the tuners in the above photo. Looks like some tinkering has taken place). 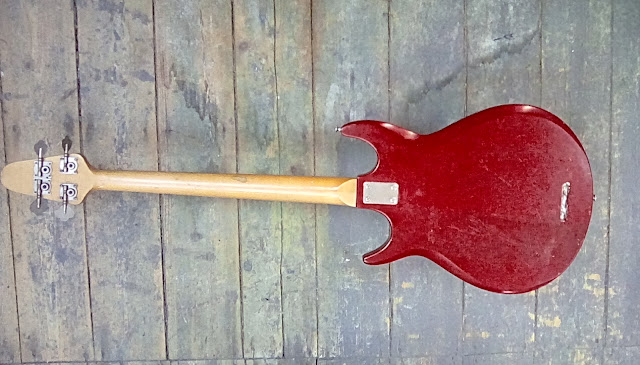 And of course, the finish could be cleaned up as well, which shouldn't be too great a problem.

All in all, a very interesting piece, and very nice for a freebie.

© 2018, Guitarz - The Original Guitar Blog - the blog that goes all the way to 11!
Please read our photo and content policy.
Posted by Gavin Lloyd Wilson at 9:31 pm