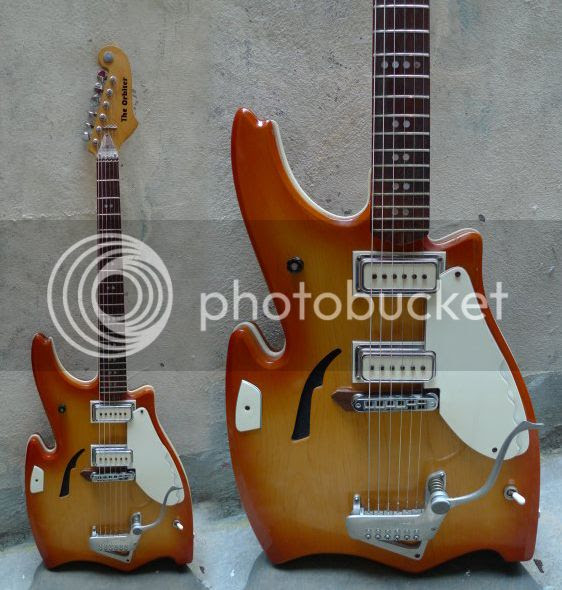 Ralph Jones founded Micro-Frets Inc in Maryland in the 1960s. Coming from an engineering background he was an enthusiastic inventor and incorporated several innovations into the company's guitar designs. One such innovation was the "Micro-nut" which allowed for perfect intonation at both ends of the strings. This was DECADES before anyone had ever heard the names Earvana or Buzz Feiten.

This particular guitar currently being offered for sale on eBay, the Micro-Frets Orbiter, is one of the more eye-catching designs. It dates from 1970 and was designed to be wireless. It would originally have had a radio transmitter fitted into the extended upper body horn.

Other interesting features are the discreet volume and tone controls hidden between the two-layer pickguard, and Micro-Frets' own vibrato, the "Calibrato", which was designed to keep the strings in tune whilst the pitch was being altered. 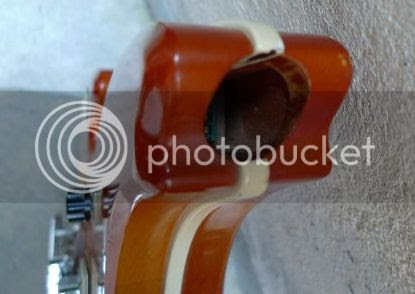 Additional: I just want to include this photo before the auction ends and the pictures are lost forever. This shows the upper horn of the guitar and the recess into which the radio transmitter would have been installed. GLWilson

NB: There are a lot of blogs STEALING content and bandwidth. If you read this anywhere else but on guitarz.blogspot.com then you are reading a blog that STEALS content. Please support original bloggers!
Posted by Gavin Lloyd Wilson at 10:36 pm