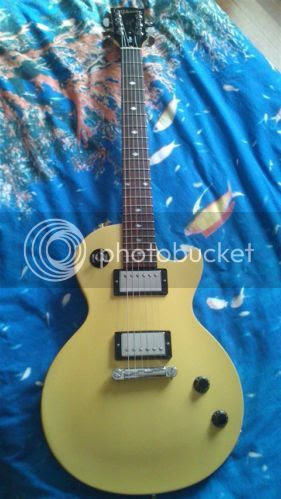 The now discontinued Gibson Les Paul Vixen was introduced in 2006 and was marketed as "A real guitar for women".

It was basically a stripped down Les Paul with a lightweight mahogany body, narrow string spacing with slim-taper neck, 490R and 498T humbuckers, and was available in Caribbean Blue, Corona Yellow, Coral, Ebony, and Red Metallic finishes. And yes, "Coral" is just another name for "pink".

It followed in the footsteps of other "girl guitars" with brands like Daisy Rock, Halo Guitars, and even Fender getting in on the action, although is it my imagination or are Fender's "Hello Kitty" Stratocasters most popular with punk acts trying to be ironic?

Some thought that the simplified control layout (just one volume and one tone) on the Vixen was somewhat insulting to women in that they weren't being given the same tonal options as on a regular Les Paul. Personally, I thought it was simply a more sensible arrangement. I never could get on with those separate volumes and tones for each pickup.

The Corona Yellow example pictured here is currently listed on eBay in Italy with a starting bid of €510.

© 2014, Guitarz - The Original Guitar Blog - the blog that goes all the way to 11!
Please read our photo and content policy.
Posted by Gavin Lloyd Wilson at 11:27 pm