Sorry, but what's it got to do with Tony Zemaitis? 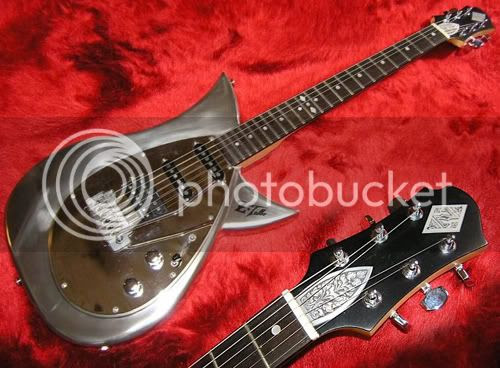 Now, don't get me wrong, I think this aluminium-bodied Tokai 'Zemaitis" Talbo is a really tasty looking guitar, but why tag on the totally spurious Zemaitis connection?

The late Tony Zemaitis created some amazing high quality "boutique" guitars, and was quite an innovator with distinctive designs such as his engraved metal fronts and pearl mozaic tops. (See the Official Zemaitis Guitar Owners Club website).

I was alarmed a couple of years ago when the Japanese appropriated his name and began making faithful replicas (see www.zemaitis.net). They are high-quality replicas, but personally I find the idea of putting them out under the "Zemaitis" banner a little bit tasteless.

Now this Tokai Talbo is one step further away again. It's a Tokai Talbo (which always was a metal-bodied guitar) but with a Zemaitis-shaped headstock. As far as I am aware there is no genuine Tokai/Zemaitis connection so, again, this seems improper.

A fine guitar, but why cash in unnecessarily on the late Tony Zemaitis' name?
Posted by Gavin Lloyd Wilson at 1:07 pm