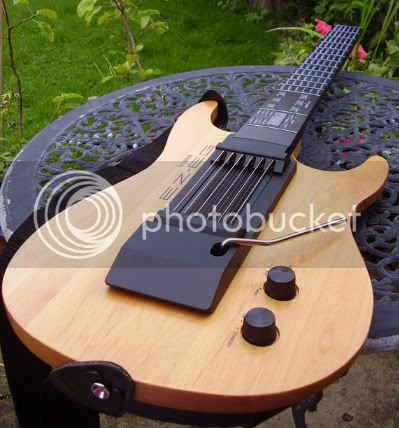 Here's something that I've been playing about with over this last week. Now I've seen these "guitars" before and had always written them off as being toy-like. However, having read a few reviews and followed some discussions on forums, I decided that I'd like to try one out. Although it was designed as a basic learning instrument (the idea being that the learner can play along to songs with a backing track whilst being guided by chord shapes that light up on the "fretboard"), the fact that it is MIDI-equipped makes it really quite interesting.

I found a seller from Japan on eBay who seemed to be shifting a fair few of these, and the price wasn't too prohibitive, so I thought I'd give it a whirl. Last Monday I arrived home to find that it had been delivered - and all without having to pay the expected custom charges (although perhaps I should keep quiet about that).

Getting it out of the box my first impression was of how toy-like it looked. The wooden body is a nice touch, but much of the rest of it is plasticky and flimsy-looking. The wooden portion of the body is only a thin slice sandwiched between two layers of plastic housing parts for the electronics. I mean, look at the back of this instrument, it's hardly neat is it? It would have been so much nicer if all the electronics could have been housed inside a wooden body. It needn't cost that much to produce. Bear in mind that Yamaha also produce the cheap and cheerful (and excellent value-for-money) Pacifica 112 guitars which have solid wood bodies.

The plastic neck also is very insubstantial. When playing the "guitar", I was aware that I was bending the neck when playing certain chords. Again I wonder if the back of the neck couldn't have been made from wood.

Another gripe is that on my model the tremolo arm seems to be totally knackered. Unfortunately this guitar was sold as seen, and even if it wasn't any return postage to Japan would make this a much more expensive experiment.

On plugging in and turning it on I soon found out that the internal speaker beneath the "strings" on the body is absolutely rubbish. Every sound I tried selecting was distorted and quite unlistenable. Oh dear, so far NOT so good.

Next I plugged in headphones. Now, that's better!

Now this "guitar" doesn't actually have any strings as such. It has buttons for each of the fret positions on six strings up to the twelth fret, and for the right hand it has six plastic bars which can be picked, plucked or strummed. I was surprised at how quickly I was able to find my way around using this system. In its favour, it does feel like you are playing a real stringed guitar. The fretboard buttons are shaped as if they are small sections of string, and the right hand "strings" are actually quite responsive. Keying the left-hand string-buttons will start up the relevant note(s) but quietly as if hammering on with the left hand on a real guitar. You need to strike the right hand "strings" to get any real attack to a note.

Obviously with the string-buttons you can't perform string bends so no chance of any expression there, but you are allowed quite a lot of expression with the right hand as those bars seem very responsive. They are certainly responsive in terms of volume, in how hard or softly you play the strings.

I suppose the other way of injecting a bit of expression would be through use of the whammy bar, but that's a no-no on this particular example.

There are twenty on-board sounds. A classical guitar, steel-strung guitar, twelve string, several basses, banjo, etc. Some sounds are better than others (the banjo's quite good), and the bass sounds are better when you drop the whole instrument down an octave using the tuning function. The 12-string sound raised an octave gives quite a nice mandolin sound. 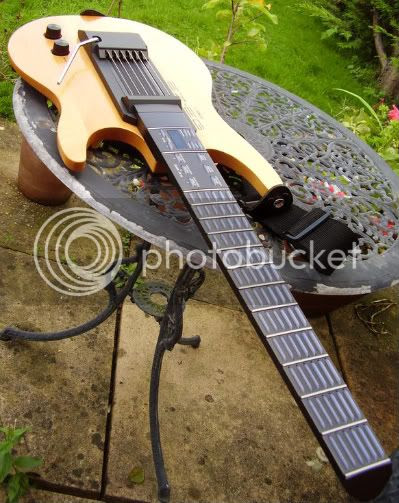 Did I mention that the string-buttons on the "fretboard" light up as you play them?. Although this was conceived as a learning aid and might seem a little cheesy, it's still quite useful because it highlights where you are playing sloppy chords, perhaps where one finger is straying slightly onto a string where it shouldn't, which I'm sure I do quite a lot. So, it discourages sloppy playing, which is surely a good thing.

So things are getting more interesting, but it's still limited in what it can do.

Next I dug out my old Yamaha QY-20 sequencer and connected the guitar with MIDI cables. Now the cables were quite short at only two metres so I made a mental note not to go walkabout while playing. (I doubt I'd ever want to play this in a performance, so no worries about running about the stage and not having a long enoguh MIDI cable).

I used to use the QY20 quite a few years ago when recording songs. I'd spend ages programming it, but rarely entered any tracks in real time as I'm not too familiar with a keyboard layout and also the keyboard on this thing is tiny and made of rubber. How great would it be to be able to use a controller laid out like a guitar fretboard, something that I'm familiar with.

The guitar hadn't come with a manual so there ensued a session of trial and error trying to get the guitar to communicate with the QY-20. For ages it seemed that nothing was working, then I realised that I had a synth sound from the QY-20 on the high E-string.

With just one string working I tried out a few QY-20 sounds. Some worked better than others. Not everything sounds great with the kind of attack you get from plucked strings. I particularly liked some of the more tuned percussion sounds such as vibes and xylophone.

It took me a while to work out how to get all the other strings working. The QY-20 is an 8-track sequencer. What the MIDI was doing was assigning one "string" of the guitar to each of the first six channels of the QY-20. I found it somewhat tedious having to dial in the same sound to each of the six channels just to try out a synth sound across the whole guitar, but I soon realised that this system had its advantages too. For example, I could assign different synth sounds to different strings. This sounded quite interesting with sax sounds where I could put a baritone sax sound on the low E and A, tenor sax on D and G, and alto sax on B and high E.

Another trick was that I was able to pan each string to a different position in the stereo spectrum. Neat!

Now I was beginning to get ideas... But, these are going to have to wait for now as I want to experiment some more. I think the real test will be to record a song using this instrument.