Do you want spiders or pigs on your guitar? 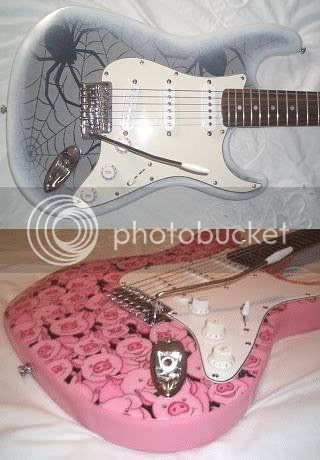 This seller has a bunch of interesting customisations of cheap guitars for sale on eBay right at the moment.

Several have fabric-covered bodies which are then lacquered over. I thought that these two examples were quite eye-catching. The spider guitar would probably appeal to many up and coming rockers, but I'm not really sure who'd want to buy the pig guitar.

Unfortunately some of his other customisations are spoilt by his insistence of putting counterfeit Fender logos on the headstock. He's also very cheekily added a Gibson decal to an LP clone. Regular readers will know my thoughts on this practice.

If it's not a Fender/Gibson/Rickenbacker/(whatever) then DON'T put that company's logo on it! It's fraud, plain and simple.
Posted by Gavin Lloyd Wilson at 12:44 pm