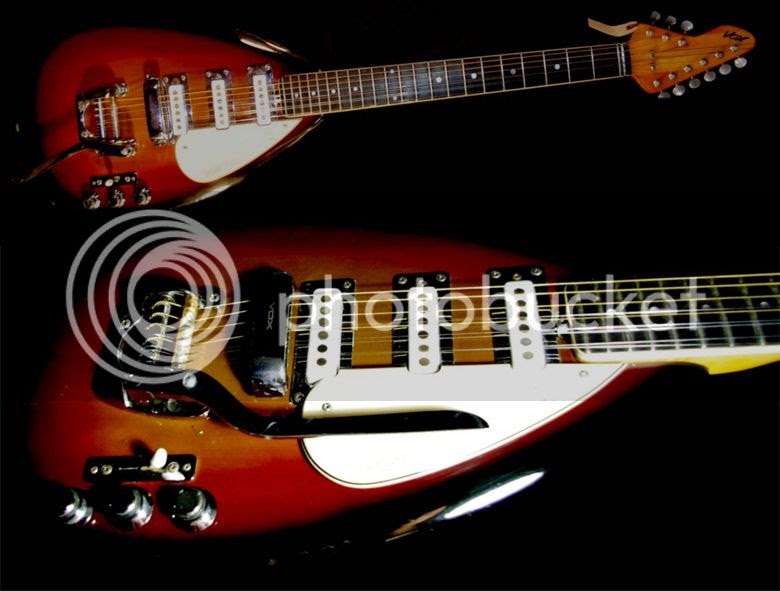 This isn't just any old Vox teardrop-shaped Mark series guitar. Just check out that headstock. Several manufacturers have dallied with 9-string guitars, that is, guitars with six courses, three of which are doubled. These have taken several forms. I have seen acoustic 9-strings which had the bass strings doubled (I believe Gordon Giltrap used such 9-string guitars), and of course there have been various electric models such as this Vox Mark IX from 1966 which have the higher strings doubled. The intention is to create a 12-string sound on an instrument that is a little easier to handle than a 12-string and on which you could also play lead lines or riffs, power chords or whatever, on the single strings depending on whether they are to the bass or the treble side.

Personally, I'd like to see a 9-string with the B, G and D strings in pairs. This is the way that some studios set up their 12-string guitars and does have a certain logic. The problem with doubling just the three higher strings as on this Vox, is that only the G has an octave string, as the E and B strings are merely doubled up in unison. I know from my own 8-string acoustic that adding octave strings to the middle most courses gives very good results.

The Vox Mark IX was not a particular success story, and examples are very rare. This example, in excellent condition, is currently listed on eBay with a Buy It Now price of $3,495.