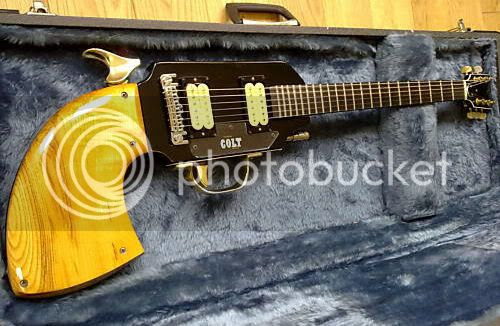 Terrible cliché aside, there's something quite tasteless and almost offensive about guitars shaped like guns. But then I'm speaking as someone who finds guns abhorrent. Members of the NRA in America would probably love such guitars. And imbeciles like Ted Nugent.

You might expect that this is an American guitar but that is not the case. It was made in England circa 1970 by Jim Cairns (who also made pickups for Burns Guitars).

Irrespective of whether you love or hate it, this Colt Peacemaker Mark II, one of the earlier guitars shaped like guns, has some interesting attention-to-detail features.

The hammer of the gun is the pickup selector, the trigger is the volume control, and the ejector rod is a push/pull tone control.

Apparently Joe Walsh has (had?) one. I'm not sure what that says about him.
Posted by Gavin Lloyd Wilson at 4:46 pm