Uncompromisingly evil aluminium guitar from hell (AKA The Ukraine) 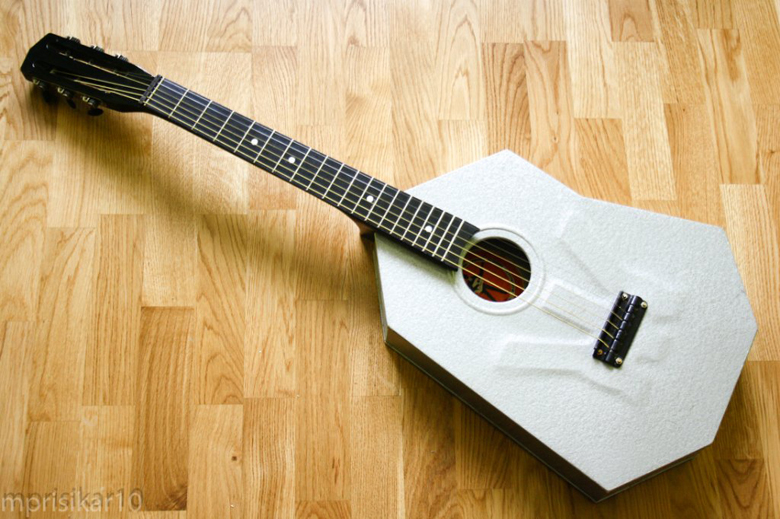 Firstly I'd just like to say I've done some serious detective work to bring this post to you. I saw this funky and rather spiffing Zhitomir guitar a couple weeks back but I wanted to find out a little more information than the seller gave.

In fact, my in-depth investigations revealed that seller got his information from cheesyguitars.com so I'm going to quote from both sources:


Check out this hot piece of Soviet history (cheesyguitars actually said Soviet junk). The date of its introduction in mass production is unknown, but I it must be somewhen around 1970s (1980s according to CG but I guess sometimes Ebay-speak can be a little like estate agent speak).  It was produced in very small quantity, so you won't find this guitar again (Ebay-speak).

The body sports an extremely intriguing octagonal shape with a giant Russian letter "Ж" (Zh) embossed on it, which must remind the proud owner of this deadly weapon the name of its manufacturer - Zhitomir Factory of Musical Instruments. The label inside has a picture of some cool guy dressed in black suit - perhaps a Beatle - playing this guitar.

The best thing about "Zh" is the material of its body. It's aluminium (!!!) (Ebay exclamations), just a thick sheet of painted aluminium folded in shape of... well... guitar. What kind of evil mind could put forward an idea to produce guitar from aluminium in one of the most forested regions of Ukraine?

I think it's perfectly suit (CG spelling mistake copied by Ebayer) for true Norvegian black metal musicians (or as a present for vintage rare collector), because the sonic palette is really uncompromisingly evil, to say nothing of this instrument's looks.

The guitar is on Ebay with a $1,099 price tag and it's already garnered four offers, so if this is your bag, get on over there and tussle with the other hopefuls for it.


There is a little more on CG but it doesn't apply to this particular instrument although it does show that the guitar on sale is not the one played by Vopli Vidopliassova, the popular Ukrainian rock band, in their 1989 hit "Юра". For the eagle eyed, there is clue in the instrument itself (the one in the video) or you find out on CG but that would be cheating. (clue: the neck).

Not surprisingly, being from The Ukraine, they play some other interesting Ukrainian guitars in one of their other videos such as this enigmatic performance from 1989. CHECK OUT those guitars!

A Youtube search for them in their Ukranian name Вопли Видоплясова will lead to a veritable treasure chest of their other videos. Well worth the watching and not just for the guitars.

David in Barcelona PI
PS. Anyone interested in crazy vintage Eastern Bloc guitars (and who isn't?) could do worse than spend a little time perusing the archives over at CheesyGee.