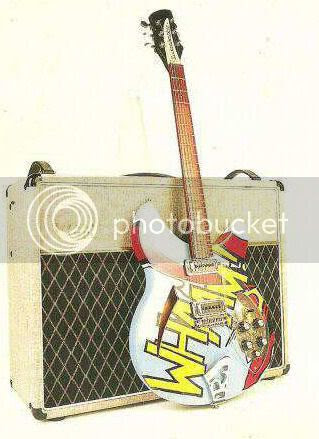 This is the first in an occasional series of blog items, basically for when I'm experiencing a slow news day in the guitar world and for when I haven't found anything particularly alarming on eBay to show you.

Here's a guitar that Paul Weller used in The Jam. It's a Rickenbacker 330 finished in a pop-art design borrowed from Roy Lichenstein. Allegedly this guitar was actually quite unplayable, and was mainly used for promotional purposes such as TV appearances (i.e. when the band were miming). Nevertheless, it's a fantastic looking piece. If it were mine I'd take it to a luthier and see about making it fully playable again.

Apparently there's no truth in the rumour that Andrew Ridgely of Wham! offered to buy the guitar from Weller, although perhaps having that other band's name plastered over the front of it was what prevented Weller using the guitar with the Style Council.
Posted by Gavin Lloyd Wilson at 8:53 pm