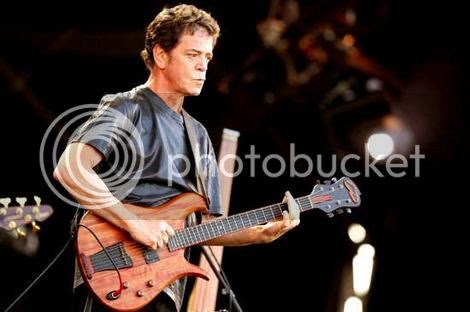 Known throughout the world for songs such as "Walk On The Wild Side" and "Perfect Day", both from his hugely influential 1972 album "Transformer", Reed was also a keen experimentalist in the world of music.

He was a keen user of cutting edge guitar designs such as early versions of the Klein headless ergonomic guitar, and the Moog guitar as designed by Paul Vo.

His 1970 double album "Metal Machine Music" - a wall of "elctronically generated audio feedback" was interpreted by many as a comptempt-fuelled attempt to break his contract with RCA Records, but Reed insisted that it was a serious work and it was even adapted for orchestral performance in the 2000s by the German ensemble Zeitkratzer.

For myself, one particular Lou Reed innovation that I have enjoyed playing around with is Ostrich tuning, named after a pre–Velvet Underground song "The Ostrich" by Lou Reed and The Primitives, and which requires all six guitar strings to be tuned to the same note (effectively creating a guitar with a single course of six strings).

© 2013, Guitarz - The Original Guitar Blog - the blog that goes all the way to 11!
Please read our photo and content policy.
Posted by Gavin Lloyd Wilson at 6:38 pm