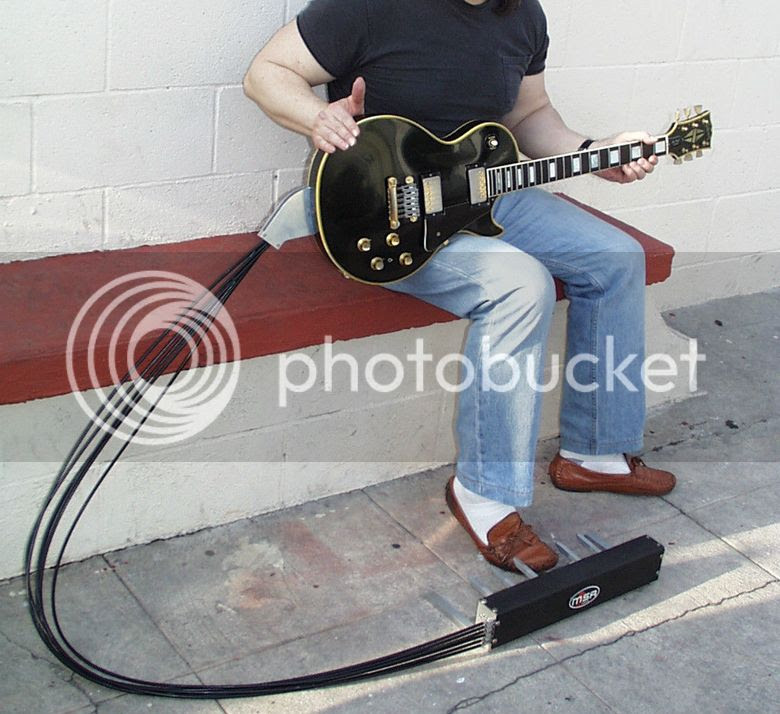 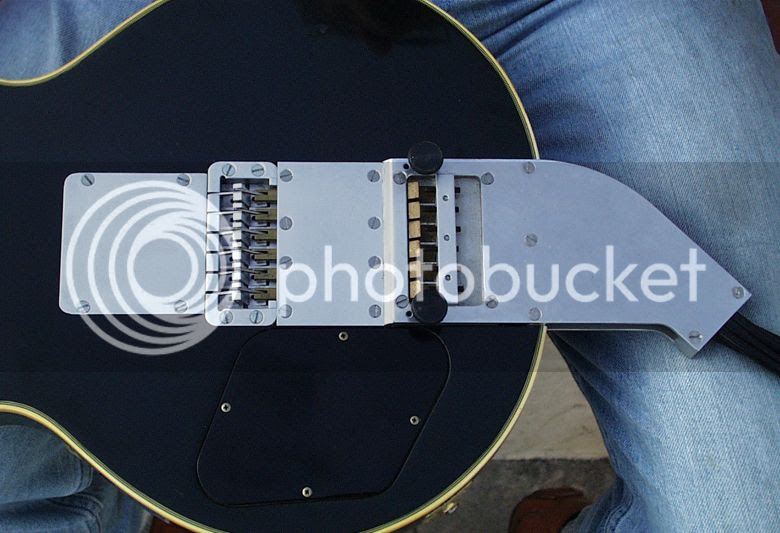 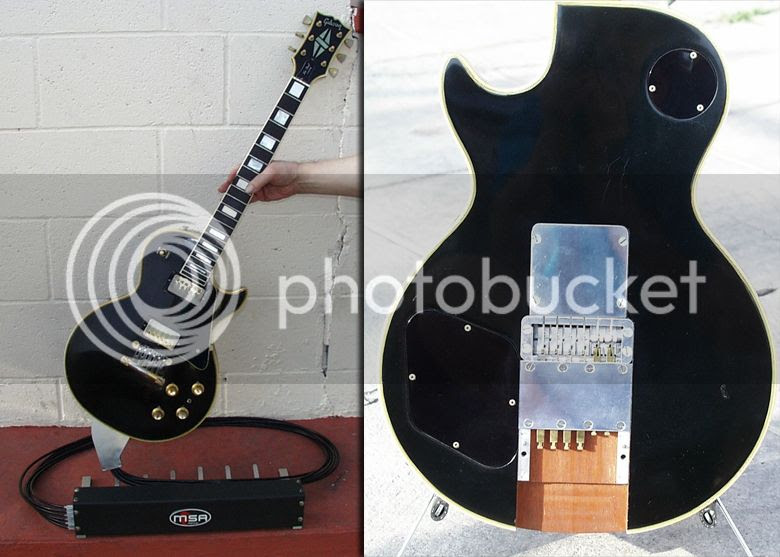 Never mind your Tele with B-Bender, this 1971 Gibson Les Paul can do all that and more. It does look a bit cumbersome with all those cables coming out of it though. Anyway, here's the story from the eBay seller:


The Les Paul [Serial #686339] is in real nice shape and before all you vintage freaks, freak out, the MSA mod was done in 1979 before this instrument was considered vintage and/or important. So take a deep breath and read about this very unique piece of guitar history.

The guitar belongs to a prominent Los Angeles studio session player from Dallas, Texas. He is retiring and selling many of the instruments that he no longer has a call for. Being in Texas put him in the circle of players that were doing a wide range of commercial music and Steel Guitar was one of the more prominent flavors in the air. Maurice Anderson and Tom Morell (of Dallas) created MSA Steel Guitars and were crazy enough to develop this pedal system for six-string guitar. Phil Baugh was an early adopter and can be heard on George Jones “HE STOPPED LOVING HER TODAY” and “IF DRINKING DON'T KILL ME, HER MEMORY WILL” playing his modified instrument. Here is a link that features Phil playing his MSA modified Peavey.

This Gibson Les Paul Custom is the only one like it in the world that has this MSA attachment, that Maurice Anderson personally installed in 1979 [may've been 1980]. There were 24 more installed on Peavey guitars, but only the first one of those was sold [for $10,000] to the Austin, Texas friend of Reese who coerced him into developing this MSA unit. The others were never sold, because they were locked up in a warehouse in receivership,as MSA went bankrupt, & the Peavey's were never seen again as far as I know [this might have changed, since MSA re-emerged from bankruptcy about a decade ago]. There was also a Gibson L-5s modified for Phil Baugh.

Here is a link to a discussion about this instrument.

The only other mods on this Les Paul are coil taps & a phase switch, for more sound variety, since it was never gonna sell as "original" anyway.

The MSA attachment comes off or goes on in ten seconds with thumb screws, & it stays in tune, unlike the permanently attached precursor that Reese made for Phil Baugh, 40 some odd years ago, for his fender Jazzmaster. The six pedals can be adjusted to vary pitch on each string, individually, anywhere from a half step to 6 half steps up or down, depending on which end of the levers on back of the guitar you attach the string to [pretty ingenious].

The winning bidder can specify the type of strings and other parameters for a complete professional (no charge) set-up before the guitar is shipped.

© 2014, Guitarz - The Original Guitar Blog - the blog that goes all the way to 11!
Please read our photo and content policy.
Posted by Gavin Lloyd Wilson at 10:51 pm