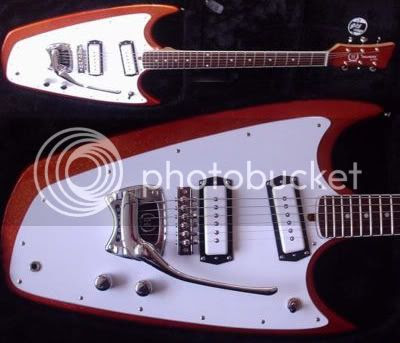 This Hallmark Swept Wing in orange sparkle is a recent reissue rather than an original from the 1960s but it would still appear to be a very nice guitar indeed with something of a surf vibe to it.

The design looks like some kind of inter-breeding between a Vox Phantom and Mosrite guitars. The latter influence is hardly surprising seeing as ex-Mosrite staff were employed by Hallmark back in the day.
Posted by Gavin Lloyd Wilson at 5:31 pm