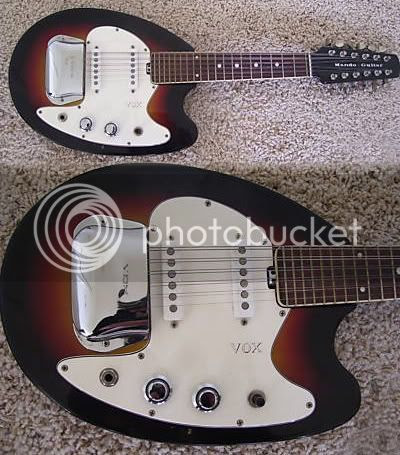 Now these hardly ever go up for sale on eBay!

Originally produced between 1964-1966, the Vox Mando Guitar is a half-scale guitar. It's tuned like a only an octave higher, and thus allows the guitarist to get a mandolin sound from a familiarly-tuned instrument.

I used to have an 80s-era Eko mando guitar (still do have it, in fact, but it's in bits - but that's another story). It was quite nice for adding little overdubs to recordings, just to get a different sound in places. However, the Eko had a DiMarzio humbucker much more suited to heavy metal. The single coils of the Vox seem to be a much more sensible choice of pickup.
Posted by Gavin Lloyd Wilson at 12:47 pm