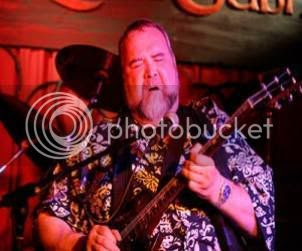 I feel absolutely depressed as I report here on this blog that one of my all-time favourite guitarists, John Martyn, has passed away this morning. I only came to his music in recent years, which is quite late on I have to admit, but once I'd had a taste I just wanted more and more.

I always liked the way you couldn't pigeonhole him. He mixed up folk, jazz, rock, blues, reggae... everything was an influence. His guitar playing was stupendous - he pioneered the use of playing with echo effects - something that players these days can do with digital looping pedals, but back in the day Martyn had to make do with cumbersome tape-echo machines such as the EchoPlex. His voice too was as distinctive as his guitar playing. His slurred vocals had an almost baritone saxophone quality to them and in a way his voice was like another instrument in the mix.

I was lucky enough to see him perform last November in Oxford on his "Grace and Danger" tour. It was a very entertaining concert and one that I will always remember, but it seemed to us watching that he wasn't a very well man - he seemed tired and even gave up playing his guitar towards the end of the gig.

The only consolation I feel right now is that we'll always have his music.
Posted by Gavin Lloyd Wilson at 4:49 pm