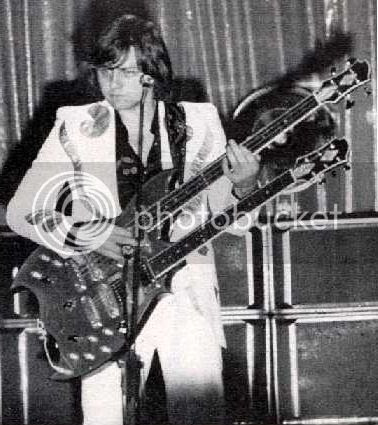 Greg Lake used to feel a bit shortchanged next to his colleagues in Emerson, Lake and Palmer. Carl Palmer had a huge battery of drums and Keith Emerson was surrounded on all sides by keyboards. Meanwhile Greg Lake is standing there with just a guitar. Not only did he try to re-dress the balance of things by marking his territory on stage with a large antique Persian rug, but he also got himself this simply enormous doublenecked guitar/bass.

Apparently it was one of only two doublenecks built by the now legendary Tony Zemaitis. Unfortuantely it was also extremely heavy, and so Lake was unable to play it onstage for more than a couple of songs. Deciding it was too impractical, he eventually gave it away. Considering the value of original Zemaitis guitars (as opposed to the recent Japanese tributes - and they are costly enough!), he must be kicking himself now.

I wonder where it is now?