We've looked at many vintage guitars on this blog, but this one is positively antique. It is a 100-year old 11-string classical guitar by Breyer Hermanos, who - according to HarpGuitars.net - were a publisher of tango sheet music and also a music store in Buenos Aires. I wonder if they had their own luthier or if they simply applied their brand name to guitars from other manufacturers? I have no idea how this is tuned or how it should be played. Two of the five additional strings are over the fingerboard and so could be fretted but the other three are off the edge of the neck itself, so technically you could say that this was a harp guitar.

The additional strings seem to have been strung up to the machine heads in a rather bizarre order, as the photo below shows. Whether there is a good reason for this, I do not know. Note also that there are in fact 12 machine heads even though it is an 11-string instrument. The maker must have been striving for symmetry, despite the fact that the headstock already looks lop-sided against the neck with the three harp strings hanging off the edge. 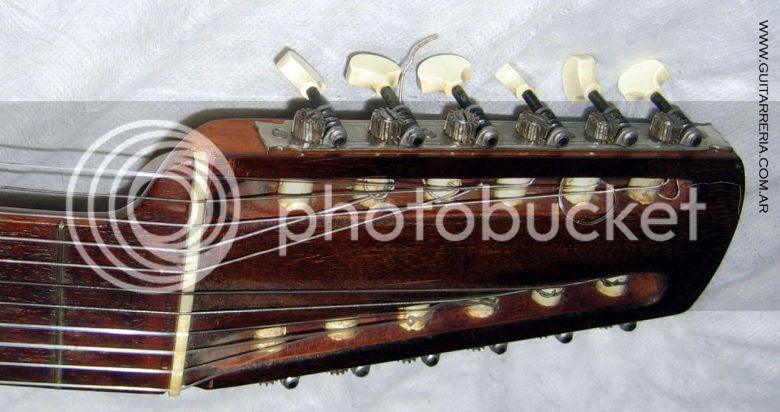