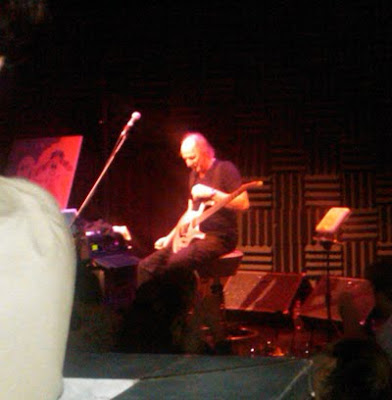 I received a very kind and generous offer to see Adrian Belew last week at Joe’s Pub in Manhattan. It was an opportunity to meet someone I had been doing business with via phone & email for over a year so I was looking forward to the evening on two levels.

I arrived a bit early and would-up baby-sitting the reserved table for about 30 minutes. This gave me a chance to do my usual survey of the surroundings. Joe’s pub is a really nice place to see live music; intimate, but not tiny and very hip atmosphere. I did notice that about every seven minutes, the 4/5/6 subway runs right below the venue and not only can you feel it, but little waves formulate in your drink. I couldn’t quite figure out if the sound of the subway was an “A” or “G”… but I think it was around there. (Yes, I actually try to figure out what notes things are… it’s a personality quirk. I’m not particularly good at it, but I struggle to not do it most of the time.)

It was about now that I really noticed how cold it was in the venue. As it was incredibly hot out all day, this was welcome and refreshing.

My friend showed up with his wife and we had a chance to meet in person and talk a bit before the show started. It went great and it was a real pleasure to finally put the face to the name. He and his wife are big fans of all things guitar, so the conversation took off like a Saturn V rocket.

Out of the blue, there was a surreal loop of music that seemed to come from everywhere. The refreshing cold was starting to feel less refreshing and I found myself counting my goose-bumps, but it was kind of an interesting background to the loop...kind of like visiting Santa's Shop at the North Pole, while peaking on acid. Finally, Adrian Belew walked out to a warm and generous applause. He immediately kicked into a riff and within seconds had sampled it, looped it, built some more complimentary riffs on top if it, and then was singing the melody.

At first I thought to myself: “Well, this is pretty much what I expected: loops, layers of loops, and then melodies on tops of the loops… I mean what else can one guitarist do for two hours….?” But as he moved into the second and third songs, Adrian wove a tapestry of rhythms and sounds that was quite interesting. After about five or six songs, he had a Q&A session. It was pretty cool to see die-hard fans so excited as they were able to ask him about things they were interested in. There were questions about his audition with Zappa’s band (his answer included a great story about a five year old Dweezil giving him the finger as he rode around on his tricycle), King Crimson, Bowie, Fripp… all good stuff and he was very gracious about answering a few zany questions.

The waitress asked me if I wanted another Coke. I said “Sure, but no ice this time please…. man is it cold in here…” She brought me my Coke, but could offer no remedy for the cold.

Back to the music, and there was plenty of it. He was using the Adrian Belew Signature Fly and it was impressive. At one point there seemed to be two tunings in use at the same time. I’m usually pretty good at deciphering this kinda stuff, but I must admit, I couldn’t quite figure out how he did it. My only guess is that he was able to route the output of each string individually and use pitch shifting to create a custom tuning scheme, while blending in standard tuning.

One of the last songs was a piece that was building very nicely; he had created some layered loops and was doing this east-Indian-flavored solo that was just awesome. Right at the climax point of his solo, there was a series of sub-sonic tones that was so low; it felt like it was coming from under the building. I It was as if three accompanists had hit their low “B” strings on their five-string-basses at the same time… I could not figure out how he could make a sound that low.

It was such perfect timing…. a random accompaniment from a NYC subway train that was totally a part of the music (I still can’t figure out if it was a fourth or a fifth below what he was doing, but it was in tune with the song). It was the first time in the whole night that I completely forgot that I was freezing cold…. While being totally random, it was one of those moments when you really get what an artist is shooting for. I was smelling the spores, drinking the cool-aid and a renewed fan for sure.

Summary: I first saw Adrian Belew in college in 1983 in a park filled with about college 3,000 students. It was very (very) hot out that day. I remember well because he spent a lot of time tuning between songs and commented on it often, saying that the heat was a “bit of a problem”. It’s funny how 27 years later, in a freezing cold room, the temperature was no problem. Of course, a big reason for that is the very well made guitar that he was using this evening vs. the guitar he used back then. I don’t remember too much else about that first Adrian Belew show as I was, uh… well, in a very “Celebratory” state that day. It was a much different experience last week at Joe’s pub. I was more tuned in to every subtlety of what he was doing. What made it so much fun is that at times, I could not keep up; both rhythmically and harmonically, he was wondering into some pretty odd parts of town that in moments, were over my head, even when I quietly tried to tap the quarter note on my leg… a few times, I lost the beat.

A nice icing on the cake was that my friend and his wife knew Adrian quite well. I went back stage with them as they wanted to say hello. It was great to see what an incredibly nice, humble and down-to-earth guy he was. They made plans to meet up later and off we went to have some drinks. It had been a long day for me and had to get some sleep, so I was not able to join my friends as they meet up with Adrian. It would have been interesting to meet him personally and have the chance to talk shop. But as they headed off to join him, I had to say goodbye, and wandered out into the night, going over in my mind, the many moments in the show that I had really enjoyed.

Ironically, as I walked along 8th street towards Broadway and then 6th avenue, I had to laugh out loud: I was so happy to be back in the sweltering New York City heat!

Have a great week,