In praise of the Gods 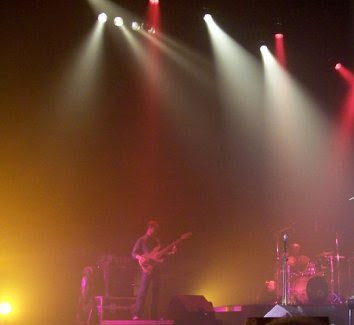 Many guitarists grow up with posters on their wall. These posters at some point represent mythical figures that are worshiped and praised. Why do we honor these gods so, and does this behaviour play any useful role in our growth process?

My Short answer is: "Because we don't know any better", and "Yes"

While there may be exceptions to this, many of us at one point in our early years became pretty fascinated with a guitarist. It starts with a friend "hipping" you to the record, you then borrowing the record for longer than you promised, you eventually having to buy (or steal) a copy for yourself, you wearing out the record (or tape, or CD, etc...), you obsessively dissecting their playing on the record... and then there is “the second album” and then the "Live in Japan" album, and the "Studio Out Takes Import", etc...

Stop: Some may say that they never did this. They picked up the guitar, took lessons, learned, and never once along the way, ever put another guitarist above themselves on the value scale. Some people are either lying to themselves or are in-fact truly unique and very talented. Both are completely possible. Now, let's forget about this 1/2 of the 1% of the population and get back to the rest of us.

When you are 12, or 16, it is likely that this guitar god is more experienced than you are. But I think a big reason why we are in such awe of these people is very simple:

You have to get up every morning, go to school, do things you hate, and listen to your parents. These folks in the posters do not.

So, really what is happening is that in tandem with the fact that they have been bending the cat-gut for a while and are capable of some wicked rockin’ they are also living a life you dream of. So you worship the package, the image, the concept. But that is ok because hopefully, you are worshiping someone who really makes great music, or at least motivates you to practice diligently. But what happens when you actually start to develop some real skills? Does the worship end? No, it morphs.

As I got to a point where I no longer had to get up, go to school or listen to my parents, I started to apply some scrutiny to my blind faith. I went through phases where I decided: “…Oh, Jimmy Rocker was never really that great… I mean, I know all his licks now, and what has he done lately…?” or “…man, when I was 16, their first album was the BOMB!.... but when I look back, they all sound wasted, and the songs are kinda hokey….. I guess I’m as good as Jimmy Rocker now….”

And then I would find an interesting article about Mr. Rocker and realized that unbeknownst to me, he did every solo on the first album in one take, or he played bass on the last four cuts because Gerry McSnide was in rehab that week and the label was pressuring them to master before the holidays, etc…..

So then I’m thinkin’ “…wow, Jimmie was one deep dude, I guess I never realized that there was more goin’ on in that band then just Marshall Stacks, $100 bills and mirrors….”

But then I find out 5 years later that they re-dubbed some of the solos on the “Live in Japan” album. I’m heartbroken. But then one day I actually meet Mr. Rocker on the corner of 8th Ave. and 50th Street in Manhattan, totally stumble through some speech about how I learned to play guitar because of him and he is insanely cool, friendly and easygoing. Now I go back and listen to “Live in Japan” again, and realize: It rocks. So what if a few of the solos were over-dubbed. Jimmy was super nice that day I met him, and I always liked their tunes anyhow.

Summary – This was all a bit tongue-in-cheek. Your “Jimmie Rocker” could have been Pat Metheny, Johnny Marr, Earl Klugh or some other legitimate axe-slinger. Point here is that I have found myself re-examining my idols as I’ve gotten older. Some I let go of many moons ago. Some I feel like I’ve grown up with and they have been kind of like the big brother who does not know me or give a crap about me. That’s ok. If I was Pete Townshend, I wouldn’t give a crap about Kevin Chisholm either.

But as I’ve grown as a person and (hopefully) a guitarist, I’ve come to understand my fascination with certain musicians, most of whom are a generation ahead of me. The ones who I still admire, I see with much more depth; they no longer exist on a piece of poster-grade paper on my wall, held in place with push-pins. They are people. They do stupid things, make great albums, marry super-models who take all of their money, inspire many young musicians, license their name out to crappy products, make incredible music that I really connect with, license their name out to pretty good products, and so on. I don’t really know how my journey through the world of guitar would have been without my heroes. They inspired and motivated me. Even though I realized as an adult that they are less than perfect, it is that complex imperfection that makes them even more inspiring. I now know how much patience and effort it takes to ride in a van for 12 hours to get to a gig or how important it is to hear a band mate out when they have an idea, even if you think their idea is retarded. I never knew or thought about this kinda stuff when I was 14. I just thought my idols walked around in their stage clothes all day and were best friends. Even though my personal experience involved a lot of self-discipline as well as trial-and-error, growing old with my guitar gods has also been an interesting experience that has provided me some useful perspective on the music business, and in a funny way, some of life’s ironies.

If everyone was a really cool person and just loved to play guitar as much as they could, I think that would work out pretty well.

Have a great week,