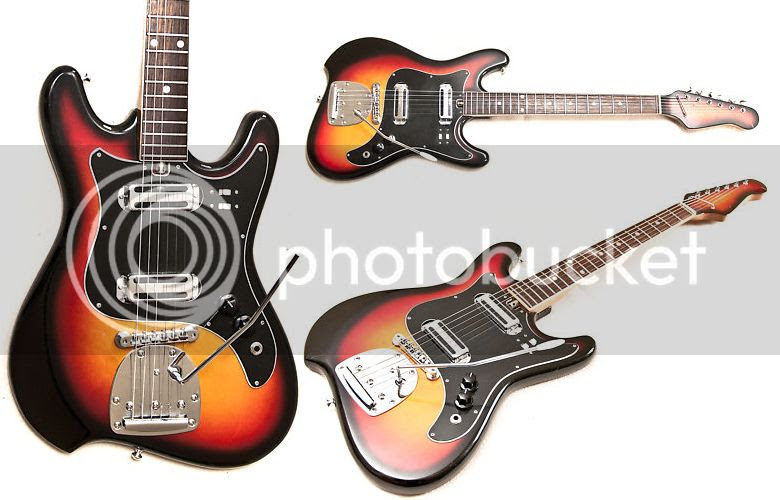 If I'm not much mistaken, guitars like this were rather ubiquitous in the 1970s in mail order catalogues and on displays in Woolworths and bearing the "Kay" brand although they were most likely made by Teisco in Japan. They are not really what you'd call desirable guitars today, although you do see one or two eBay sellers proclaiming their alleged "rarity" and being somewhat optimistic with the pricing.

At least with this example, currently being offered with a starting price of £150 and a Buy It Now of £250, the guitar has seen some serious upgrades. If I were being uncharitable, I might say something along the lines of "polishing a turd", but the seller claims that this was always a nice player and deserved an upgrade to get the best out of it. Here's what he says about it:


The old, worn pickups have since been replaced with Rickenbacker-style "toaster" pickups, which produce a beautifully warm and unique sound (the scratchplate was carefully re-cut to accommodate them). The old vibrato/tremolo has also been replaced with a Fender Jaguar-style tremolo system, which works perfectly (some of the body was skilfully hollowed-out to accommodate this larger tremolo system).

The overall result is a revitalised, utterly unique and beautiful-sounding guitar. You simply won't find another one like it; the pictures alone demonstrate this. I also believe that the guitar has not so much been modified as improved.

No doubt the guitar has been improved - I'd say the pickups, trem system, bridge, etc are worth more than the original instrument itself. Whether it'll appeal to anyone other than the guy that put it together remains to be seen.