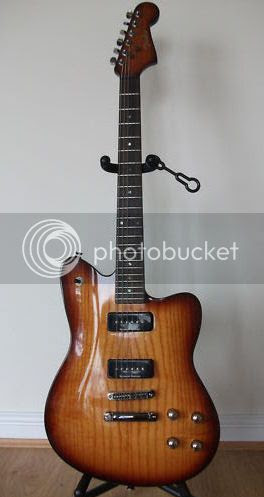 The Fender Toronado was a relatively short-lived series of guitars produced between 1998 and 2007. The body design is Fender-ish in that it looks like a slightly chubbier version of the Jazzmaster/Jaguar, and in common with the latter model it sported a scale length. Most models were produced in Mexico.

This Fender Toronado in Koa (according to the seller), currently being offered for sale with a Buy It Now of £300, is a more unusual model. It has two Seymour Duncan P90s instead of the Toronado's usual pair of Fender Atomic humbuckers. Possibly this is a US Special or Highway One USA-made variant. Is anyone out there able to more positively indentify it for us?

Edit: OK, so it has a Made in Korea sticker on the back of the headstock. I missed that before. As Martin says in the comments, it could be Korean Custom Shop.

Email ThisBlogThis!Share to TwitterShare to FacebookShare to Pinterest
Labels: Fender, What's that guitar?